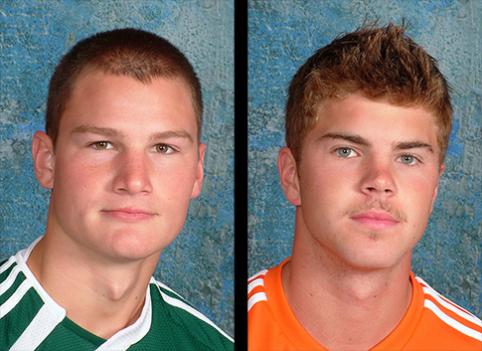 Dice is the MIAA Offensive Player of the Week. The junior from Allendale (Hudsonville Unity Christian HS) scored the deciding goal on the sixth penalty kick shootout attempt to lift Hope to a 5-4 shootout win over Calvin in the MIAA Tournament championship game, after the two teams had played to a 1-1 tie through two overtime periods.

Dice also scored Hope’s only goal in regulation against the Knights. In addition, he added an insurance goal in a 2-0 tournament semifinal win over Olivet.

Dice is being honored as Player of the Week for the first time in his career.

Beswick is the MIAA Defensive Player of the Week. The sophomore from Grand Haven (Grand Haven HS) came up with crucial saves against Calvin’s top two goal scorers in the penalty kick shootout as Hope defeated the Knights 5-4 for the MIAA tournament title after the teams had played to a 1-1 tie through two overtimes.

Beswick allowed only one goal in 200 minutes of play for the tournament and made 14 saves.

Beswick is being honored as Player of the Week for the first time in his career.