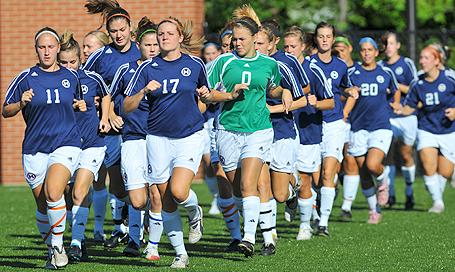 The Flying Dutch will be seeking to rebound from rare back-to-back losing seasons as they challenge for a Michigan Intercollegiate Ahletic Association (MIAA) championship.

Coach Sears begins her 10th season at the helm of the program. Her teams have averaged 11 victories per season. The 2010 Flying Dutch posted a 6-9-3 record and finished seventh in the MIAA standings (2-4-2).

Two returning players have received All-MIAA honors in their career. Junior Lindsay Jipping of Jenison (Unity Christian HS) was named to the All-MIAA second team in 2010 while junior Tricia Bajema of Grandville (Grandville HS) was a second team honoree in 2009.

Junior Alyson Epolito of East Lansing (East Lansing HS) was named the team's most valuable offensive player in 2010 while Sara Lang was honored by her teammates as the most inspirational player. Sopmore Courtney Laux of Novi (Novi) returns from a rookie of the year season.

The MIAA will be returning to a home-and-away conference schedule with a season-ending tournament involving the top four teams to determine who will represent the league in the NCAA championships.

The Flying Dutch will be playing for a third season at Hope's beautiful Van Andel Soccer Stadium. The team will play 10 regular season home games, including four under the lights.