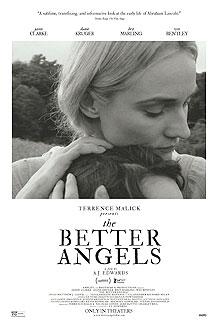 The Hope College Knickerbocker Theatre in downtown Holland will continue its tradition of showing contemporary and independent films through its 2015 winter film series.

In addition, the Knickerbocker will host a series of three contemporary French films in January and a series of four classical films in March.

The winter film series will open with “The Better Angels,” an exploration of Abraham Lincoln’s childhood, running Monday-Saturday, Jan. 5-10. The film is set in Indiana in 1817, when the entire nation, only 40 years old and a few years removed from a second war of independence, is still raw. Men and women must battle against nature and disease to survive in log cabins. This is young Abraham Lincoln’s world. Spanning three years, “The Better Angels” explores the future president’s family, the hardships that shaped him, the tragedy that marked him forever, and the two women who guided him to immortality.

“This Ain’t No Mouse Music,” running Monday-Saturday, Jan 26-31, is a music documentary about Chris Strachwitz, a detective of deep American music, music that’s the antithesis of the corporate “mouse music” dominating pop culture. Since 1960, he has been the guiding force behind legendary Arhoolie Records, bringing Cajun music out of Louisiana, Tex-Mex out of Texas, and blues out of the country--and into the living rooms of Middle America. Born a German count, Strachwitz fled his homeland after World War II at 16. Here, he discovered, and shared, a musical landscape that most Americans missed.

“Like Father, Like Son,” running Monday-Saturday, Feb. 2-7, is an award-winning family drama from Japan. Following an unexpected phone call, affluent architect Ryota and his wife, Midori, learn that their six-year-old son, Keita, was switched at the hospital and is not their biological child. Seeing Midori’s devotion to Keita even after the news, and observing the rough yet caring family that has raised his biological son for the last six years, Ryota begins to question his own values on fatherhood as he must choose between “nature” and “nurture,” a decision that will change their lives forever.

Tickets for the winter film series are $7 for regular admission, $6 for seniors, Hope faculty and staff, and free for Hope students.

The “One Night Only” film series will run during four Mondays in March at 7:30 p.m., and will feature four films from the 1930s to 1950s with famous couples.  The Fred Astaire-Ginger Rogers musical “The Barkleys of Broadway” is showing March 2. Maureen O’Hara and John Wayne star in a romantic comedy set in Ireland in “The Quiet Man” on March 9. William Powell and Myrna Loy are hilarious in the comedy-mystery, “The Thin Man” showing on March 23. The series will end with Ingrid Bergman and Humphrey Bogart in “Casablanca” on March 30. Admission to each film will be $4 for the general public.

Individual tickets are now on sale at the Events and Conference office in the Anderson-Werkman building (100 E. Eighth Street), which is open Monday through Friday from 10 a.m. to 5 p.m.  Patrons may purchase tickets in person, online at hope.edu/tickets, or by calling the ticket office at (616)-395-7890.