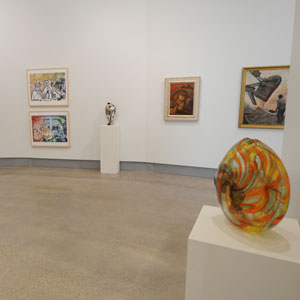 The Kruizenga Art Museum at Hope College will open and celebrate its inaugural year with an exhibition of approximately 70 works of art from the college’s Permanent Collection, many never before publicly exhibited.

The exhibition, “Past Present East West: Highlights from the Permanent Collection,” will open on Wednesday, Sept. 9, and continue through Saturday, May 14.  There will be an opening reception at the museum on Friday, Sept. 11, from 6 p.m. to 8 p.m. that will coincide with the opening reception for the exhibition “Dusk to Dusk: Unsettled, Unraveled, Unreal” in the neighboring De Pree Art Center and Gallery.

The public is invited to both the exhibition and reception.  Admission is free.

“Past Present East West: Highlights from the Permanent Collection” is evenly split between art from Europe and the Americas and art from Asia. The objects in the exhibition have been selected to demonstrate the breadth and educational value of the collection. Most of the artworks have been acquired by Hope in the last five years.

A few works of special note in the European and American gallery include:

The Asian gallery also includes a broad range of interesting artworks, including:

Some of the artworks in the galleries will be replaced by new selections in January.

Charles Mason, the museum's director, developed the exhibition with Hope students Kristin Underhill of Holland and Vicky Fang of Shanghai, China.  In addition to serving as a resource for the entire campus as well as for the surrounding area, the museum will provide opportunities for students to be involved directly, including participating in exhibition development, serving as docents, and collection management and research.

The Kruizenga Art Museum has been designed to serve as an educational resource for the entire campus as well as beyond.  The museum features two galleries, one of 2,000 square feet and the other of 1,500 square feet, as well as a classroom for viewing of select pieces and state-of-the-art, climate-controlled storage space for the Permanent Collection.  The collection housed in the museum consists of more than 750 objects representing a variety of traditions but with a particular emphasis on Asian art.

The Modernist facility stands as a pavilion structure in the center of campus, and is sheathed in flame-cut charcoal gray slate panels and reminiscent of an artist’s palette in shape.  It is named in honor of a leadership gift from Dr. Richard and the late Margaret Kruizenga of Holland, each of whom graduated from Hope in 1952.

The building was designed by architect Matt VanderBorgh of The Hague, The Netherlands, a 1984 Hope graduate who is director of C Concept Design, which has developed projects in 30 countries on four continents.  Leadership guidance for advance programmatic planning was provided by Donald Battjes, a 1968 Hope graduate from Los Angeles, California, who is retired from a career in corporate facilities and real estate administration, most recently as chief of operations and facility planning with the Los Angeles County Museum of Art.  The local architectural firm Progressive AE refined the design and produced construction documents.

Hope broke ground for the building on May 24, 2013.  The total project cost is $7.8 million, including construction and an operating endowment for ongoing building maintenence.

The Kruizenga Art Museum will be open Tuesdays through Saturdays from 10 a.m. to 4 p.m., although the museum is closed when the college is closed during and between the Christmas and New Year’s holidays.  The museum is handicapped accessible.