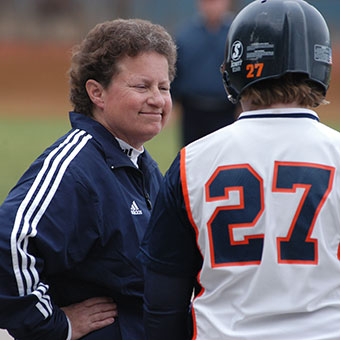 Karla Wolters of Zeeland, who taught and coached at Hope for 23 years before retiring in 2010, died on Monday, Nov. 28, 2016 after a two-year struggle with multiple myeloma. She was 65.

Wolters was a professor emerita of kinesiology and had coached multiple sports across her career, serving as the college’s softball coach from 1988 through 2010.

“Members of the kinesiology department and athletic program at Hope College, are deeply saddened by the death of our colleague and friend Karla Wolters,” said Dr. Kirk Brumels, professor of kinesiology and department chair.  “Karla was a talented classroom professor and softball coach who showed us how to be strong and true through a personal faith in Jesus Christ, as well as through a commitment and dedication to the students of Hope College. Karla’s presence around campus will certainly be missed, but her legacy will be long lasting and one that we will lean into for years to come. The memory of Coach Wolters’ desire to engage Hope College students in the classroom while also challenging them on the field of competition provides us a tangible template for how to provide experiences of academic transformation and competitive excellence.”

“Karla was certainly a professor, coach, and colleague, but most of all she was a mentor and friend,” he said.

A 1973 Hope graduate, Wolters joined the Hope faculty in 1987.  She had a passion for the history of sports and a special interest in the history of the Olympics and women in sports. She enjoyed sharing the historical information and her collection of antique sports equipment with her students and community members.

Wolters brought a new level of success to the college’s softball program, leading the Flying Dutch to five NCAA Division III tournament appearances.  She was named the Region softball coach of the year in 1991, 1992 and 1995, and the Hope staff was honored by the MIAA in 2006. She closed her career ranked the fifth-winningest NCAA Division III coach all-time.

In addition to softball, Wolters coached volleyball, field hockey and women’s tennis during her time at Hope.  A member of the faculty and coach at Calvin College—where she was named national Division III coach of the year in volleyball—before coming to Hope, she was among the most successful coaches in the history of the Michigan Intercollegiate Athletic Association with 20 conference championships in softball, volleyball and women’s basketball.

She also introduced the sport of korfball to Hope and western Michigan through a class she taught. In the fall of 2005 Hope entertained a Korfball team from Europe and the next summer a team comprised of Hope students and recent alumni traveled to Europe for a series of games. Wolters served on the governing board of USA Korfball and in 2007 was an assistant coach on the USA team that competed in the World Championships in The Czech Republic.

She was a standout student-athlete during her undergraduate years. In her four years at Hope, she played 13 varsity sports seasons, lettering in tennis, field hockey, basketball and volleyball.

She received the Master of Arts degree from Michigan State University in 1978.

In 2008, Hope honored Wolters and her husband, Tom, who also graduated from Hope in 1973 and survives her, by naming the new softball stadium in their honor.  Calvin College named her an “Honorary Knight” during the Calvin-at-Hope volleyball match on Oct. 28, 2009, and she received the “Hope for Humanity Award” from the Alumni H-Club at Hope on Oct. 23, 2010.

In addition to her husband, survivors include brothers, Ken Hoesch, and Tim and Rane Hoesch; brother-in-law, Bill and Susan Wolters; nieces and nephews, Kate and Troy De Wys, Tom and Kylie Hoesch, Karl and Tracey Hoesch, Hayley Hoesch, Sam Hoesch, TJ and Martha Jane Wolters, Megan and Tyler Thompson; and aunts and uncles, Kathryn Rockwood, Rick and Donna Walter, Gary and Kathleen Walter.  She was preceded in death by her parents, Tex and Alyce Hoesch; and brother, Tom Hoesch.

Visitation will be on Friday, Dec. 2, from 2 p.m. to 4 p.m. and from 6 p.m. to 8 p.m. at the Yntema Funeral Home, 251 S. State St. in Zeeland,   The funeral service will be on Saturday, Dec. 3, at 11 a.m. at Christ Memorial Church, 595 Graafschap Road in Holland. Interment will be in Zeeland Cemetery. Memorial contributions may be given to Christ Memorial Church or Hospice of Holland.