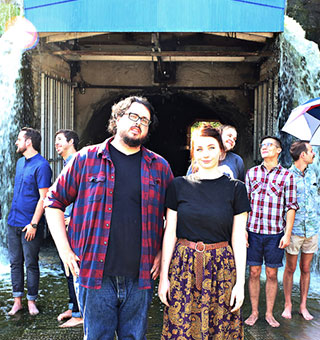 The Oh Hellos to Perform on Thursday, Jan. 28

The Oh Hellos, the brother and sister duo of Tyler and Maggie Heath, will perform with special guest Liza Anne through the Hope College Concert Series on Thursday, Jan. 28, at 8 p.m. in Dimnent Memorial Chapel.

The performance comes shortly after the release of the Oh Hellos’ latest recording, “Dear Wormwood.”

The Oh Hellos began in a cluttered bedroom, where the Texas siblings recorded their self-titled EP in 2011. In the fall of 2012, they released their debut full-length record “Through the Deep, Dark Valley,” an album full of regret and redemption, which they wrote, recorded, produced, mixed and mastered themselves. When the time came in early 2013 to bring the music to the stage, the Heaths reached out to friends and gathered together an ensemble of touring musicians.

“Dear Wormwood,” their second full-length album, is a collection of songs inspired in part by C.S. Lewis’ “The Screwtape Letters” and Patrick Rothfuss’ “The Name of the Wind.”  The album tells the story of a protagonist trapped in an abusive relationship, by way of letters written to the antagonist.

Tickets for the concert are $20 for regular admission, $15 for members of the college’s faculty and staff, and $10 for Hope students.  Tickets are available at the ticket office in the Events and Conferences Office located downtown in the Anderson-Werkman Financial Center (100 E. Eighth St.).  The office is open weekdays from 10 a.m. to 5 p.m. and can be called at (616) 395-7890. Tickets are also available online.  Dimnent Memorial Chapel is located at 277 College Ave., at the corner of College Avenue and 12th Street.