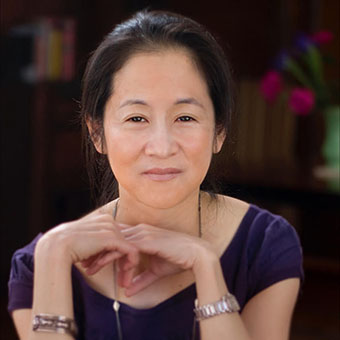 The community-wide Big Read Holland Area program coordinated through Hope College and focusing on the book “When the Emperor Was Divine” during November will provide historical, literary, and cultural context within multiple events including multiple lectures, a free film showing, a children’s story time, a dinner, a musical performance, a poetry-writing workshop and a keynote address from the author of the novel, Julie Otsuka. 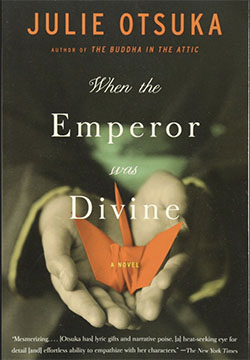 The program is funded through a grant to the college through the Big Read initiative of the National Endowment for the Arts (NEA) in partnership with Arts Midwest.

The public events will begin with a TED-talk-styled kick-off celebration at Hope on Wednesday, Nov. 1, and continue through Thursday, Nov. 16, at a variety of locations in Holland, including a keynote address by Julie Otsuka on Thursday, Nov. 9, at Hope.  After reading the book, community members are also invited to participate in any number of single-evening discussion groups taking place throughout Holland.

Admission to all of the activities is free, with exception of a cultural dinner scheduled for Tuesday, Nov. 7.

Copies of the book will be available at no cost while supplies last to those who do not have access to the novel in other ways. They will be offered on Saturday, Oct. 28, at Herrick District Library, the Herrick Northside Library and Zeeland’s Howard Miller Library, and on Wednesday, Nov. 1, at the kick-off event.

To open the month, a TED-talk styled evening on Wednesday, Nov. 1, at 7 p.m. at Hope College’s Knickerbocker Theatre in downtown Holland will put “When the Emperor Was Divine” into written, historical and cultural context.  The presenters will be Amy Otis-De Grau, senior director of the Fried Center for Global Engagement at Hope; Dr. Wayne Tan, assistant professor of history at Hope; and Dr. Jeanne Petit, professor of history and department chair at Hope.

The Raion Taiko Japanese drumming ensemble will perform on Friday, Nov. 3, at 7 p.m. in Dimnent Memorial Chapel at Hope.

Jack Ridl, an acclaimed poet and professor emeritus of English at Hope, will lead a poetry-writing workshop on Saturday, Nov. 4, at 10 a.m. at the Holland Area Arts Council.  The workshop will examine passages from “When the Emperor Was Divine” to realize Otsuka’s unique and powerful use of language.

Photographer Kevin Miyazaki will discuss his artwork and its focus on issues of memory on Monday, Nov. 6, at 7 p.m. at the Saugatuck Center for the Arts.  He will discuss his Camp Home project, which is on display at the center and documents the reuse of buildings from the Tule Lake and Heart Mountain Japanese internment camps, where members of his family were incarcerated during World War II.

Dr. David Myers, professor of psychology at Hope, will lead “Who is My Neighbor? Faith, Justice and Community” on Tuesday, Nov. 7, at 3 p.m. in the rotunda of the Martha Miller Center for Global Communication at Hope.  The interactive event will provide the historical context of “When the Emperor Was Divine” by discussing Christians’ responses to the Japanese-American internment and draw parallels between those events and current politics regarding refugees.

A Japanese Culture and Educational Dinner will take place on Tuesday, Nov. 7, at 6 p.m. at the ballroom of the Haworth Inn and Conference Center at Hope.  The event will feature Japanese and Japanese-American cuisine as well as a short presentation on Japanese culture as it pertains to the book.  Tickets are $9 for adults and $4.50 for children age four-11, and free for children under four.  Advance registration at the Big Read Holland Area website is required.

The film “Girl Unbound” will be screened on Wednesday, Nov. 8, at 7 p.m. at the Saugatuck Center for the Arts.  Reflecting the themes of identity and discrimination of “When the Emperor Was Divine,” the 2016 documentary explores the world of Maria Toorpakai Wazir, a champion female athlete who defies the Taliban to pursue her dream.

Otsuka will deliver the Big Read Holland Area’s keynote address on Thursday, Nov. 9, at 7 p.m. in Dimnent Memorial Chapel at Hope.  She will discuss her family’s experience of internment during World War II, the creative process and how she came to be a writer, as well as the relevance of the Japanese American internment to contemporary times.  A question-and-answer session and book signing will follow.  She will also participate in an event for middle school, high school and college students earlier in the day.

This year’s Big Read Holland Area is also featuring a children’s book, “A Place Where the Sunflowers Grow” by Amy Lee-Tai.  The story is about Marj, a Japanese American child who finds hope in the Topaz Internment Camp during World War II.  Lee-Tai will give a reading, take questions and sign books on Saturday, Nov. 11, at 11 a.m. in the children’s area of Herrick District Library.

Artist, writer and speaker Makoto Fujimura will discuss Japanese religious history and cultural attitudes on Sunday, Nov. 12, at 7 p.m. at Third Reformed Church.  He will deliver a lecture on “When the Emperor Was Divine” as well as his insights on culture, art and humanity on Monday, Nov. 13, at 7 p.m. in the Concert Hall of the Jack H. Miller Center for Musical Arts at Hope.

The Holland Museum will host “Lunch at the Museum: Memories of World War II” on Wednesday, Nov. 15, at noon.  Those attending will have an opportunity to listen and reflect as fellow community members share their stories, and will be encouraged to share their own if they wish.  An opportunity will follow to visit the museum’s World War II exhibit, “For the Future Peace.”  Beverages will be provided but attendees should bring their own sack lunch.

Dr. Kim McKee, director of the Keutsche Office of Local History and assistant professor at Grand Valley State University, will present “Claiming America: A Question of Belonging” on Wednesday, Nov. 15, at 7 p.m. at the Howard Miller Public Library.  She will explore the significance of Otsuka’s internment narrative from its multiple perspectives and implicit calls for empathy as a means of understanding how the horrors of war affect every-day Americans.

The closing event will take place on Thursday, Nov. 16, from 7 p.m. to 9 p.m. at the Holland Armory.  The open-house-style evening will showcase hundreds of area students’ artwork created in response to “”When the Emperor Was Young” as well as collaborative projects by the two Big Read Holland Area artists-in-residence, Joel Schoon-Tanis and Barry Elz.  The exhibition will also be open to the public on Friday-Wednesday, Nov. 17-22, from 11 a.m. to 4 p.m.

There will also be several book discussions open to the public.

The first, on Thursday, Nov. 2, at 7 p.m., coincides with the exhibition “From the Stars: Innovation and Inspiration in Meiji Japanese Art,” which is featured at the Kruizenga Art Museum at Hope.  Charles Mason, who is director and the Margaret Feldmann Kruizenga Curator of the museum, will present a talk about the exhibition, followed by discussion of the book led by Dr. Tatevik Gyulamiryan, assistant professor of Spanish at the college.  Advance registration is required.

During an interactive event on Monday, Nov. 6, at 1 p.m., Dr. Jesus Montaño, associate professor of English at Hope, will interview Kevin J. Miyazaki about his internment-camp photography, his family experiences and his reactions to “When the Emperor Was Divine.”  The event will take place in the Rare Books Room of the college’s Van Wylen Library.

In addition to the events and discussions open to the general public, several area schools are participating by having students read the book, as are other community groups that have organized their own discussions.

The Big Read initiative is designed to revitalize the role of reading in American culture by exposing citizens to great works of literature and encouraging them to read for pleasure.  Hope is one of only 77 non-profit organizations nationwide to receive a grant to host a “Big Read” project between September 2017 and June 2018.

More information about the Big Read Holland Area events and the book is available at hope.edu/bigread