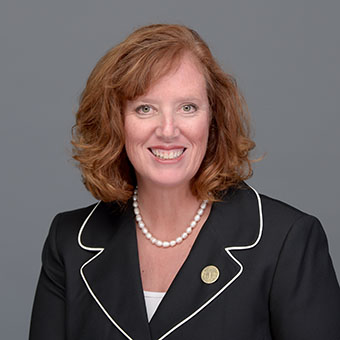 “Last Lecture” on October 24 to Explore “Lessons from Adversity”

Dr. Cady Short-Thompson, provost at Hope College, will present the address “Lessons from Adversity” on Tuesday, Oct. 24, at 7 p.m. in Schaap Auditorium of the Jim and Martie Bultman Student Center through the “Last Lecture Series” organized by the college’s Dianne Portfleet Alcor chapter of the national Mortar Board honorary society.

Short-Thompson, who also holds appointments as a professor of communication and affiliate professor of political science, joined Hope this past summer after previously serving as dean of Blue Ash College of the University of Cincinnati system since 2010.  She delivered the Opening Convocation address at Hope on Sunday, Aug. 27.

As provost, she is the college’s chief academic officer and has overall administrative responsibility for the college’s academic departments, which are grouped within four divisions:  arts, humanities, natural and applied sciences, and social sciences.

Short-Thompson is excited to be a member of the Hope community and to help continue the college’s traditions of excellence in a rigorous and engaging liberal arts education strongly grounded in the Christian faith.  As the daughter of a United Methodist minister and a former church youth group director herself, she prizes the opportunity to combine her lifelong Christian faith with her passions for scholarly teaching and inclusive, student-centered leadership in higher education at Hope.

Her service at UC Blue Ash College ranged from increasing emphasis on experiential education via internships, service-learning, off-campus study and collaborative faculty-student research; to leading and managing the faculty and staff; to guiding development of new academic programs and review of existing programs; to overseeing facilities planning and renovation; to fundraising and managing the college’s budget; to building public-engagement programs such as partnerships with area schools.  She served on numerous university system-wide boards and committees, including chairing the Diversity Council, Presidential Task Force on Title IX Administration and Council of Deans.

Prior to becoming dean at UC Blue Ash College, she was an award-winning communication professor at Northern Kentucky University for 13 years, serving as graduate program director from 2005 to 2008 and chair of the Department of Communication from 2008 to 2010.

During 2014-15, she was one of only 24 fellows named to the inaugural cohort of the year-long Academy for Innovative Higher Education Leadership.  She has also received honors including a 2016 Women of Influence Award from Venue Media of Greater Cincinnati, a 2015 Distinguished Staff Award from the University of Cincinnati Foundation, recognition by the YWCA of Greater Cincinnati in 2014 as a Woman of the Year finalist in the Nonprofit Organization Category and being named 2004 City of Wyoming (Ohio) Citizen of the Year.

The title “Last Lecture” is rhetorical.  The lectures are not literally presented as the last that the speakers will deliver at Hope, but are meant to highlight the advice that faculty and staff would most want to share if the event was indeed their final opportunity to address the college’s students.  The speakers are asked to reflect on their careers and lives, and to think deeply about what matters to them and the wisdom they would like to impart.

The concept was inspired by the “Last Lecture” delivered at Carnegie Mellon University by Dr. Randy Pausch on Sept. 18, 2007.  Pausch, a member of the Carnegie Mellon faculty who had terminal pancreatic cancer — a fact known at the time that he spoke — presented “Really Achieving Your Childhood Dreams.”  He died on July 25, 2008, at age 47.

Mortar Board is a national honor society that recognizes college seniors for outstanding achievement in scholarship, leadership and service, and provides opportunities for continued leadership development, promotes service to college and universities, and encourages lifelong contributions to the global community.  Since its founding in 1918, the organization has grown from the four founding chapters to 231 collegiate chapters with more than 250,000 initiated members across the nation.

The Dianne Portfleet Alcor chapter has existed at Hope since the 1936-37 academic year, although it did not become part of the national Mortar Board organization until 1961.  Renamed for former long-time faculty adviser Dr. Dianne Portfleet in May 2016, the chapter has received multiple awards at the Mortar Board National Conference during each of the past several years, including being named the top chapter during the national conference in July 2010.  During the conference this past summer, the chapter received a “Golden Torch Award” and five “Project Excellence” awards.

The chapter also sponsored a “last chance talk” during the 1960s, inviting faculty to express their ideas under the hypothetical assumption that this would be the last opportunity to address the student body.  The late Dr. D. Ivan Dykstra, professor of philosophy, delivered the first “last chance talk” in the spring of 1962.

The Jim and Martie Bultman Student Center is located at 115 E. 12th St., at the center of the Hope campus between College and Columbia avenues along the former 12th Street.  Schaap Auditorium is on the building’s lower level near the southwest corner.