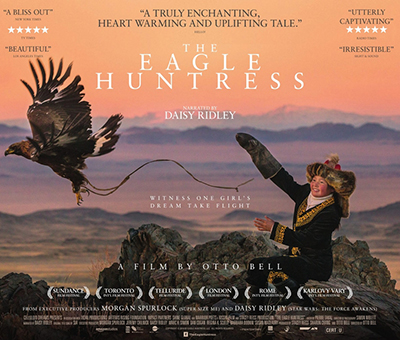 Knickerbocker Winter Film Series to Continue with “The Eagle Huntress”

The Hope College Knickerbocker Winter Film Series will continue with “The Eagle Huntress” on Monday-Saturday, March 13-18, at 7:30 p.m.

The documentary follows Aisholpan, a 13-year-old nomadic Mongolian girl who is fighting to become the first female eagle hunter in 12 generations of her Kazakh family. Through breathtaking aerial cinematography and intimate verite footage, the film captures her personal journey while also addressing universal themes like female empowerment, the natural world, coming of age and the onset of modernity. The film is rated PG-13, and is in Persian with English subtitles.

The Hamptons International Film Festival has named “The Eagle Huntress” “Best Documentary Feature,” while the National Board of Review puts the film among the top five documentaries. Kenneth Turan from the Los Angeles Times described it as “Soaring! An enchanting tale,” while the New York Time praised it with “Thrilling! A movie that expands your sense of what is possible.”

Tickets for the individual films are $7 for regular admission and $6 for senior citizens, Hope College faculty and children. Tickets will be sold at the door but are also available in advance at the Events and Conferences Office located downtown in the Anderson-Werkman Financial Center (100 E. Eighth St.). The office is open weekdays from 9 a.m. to 5 p.m. and can be called at (616) 395-7890.