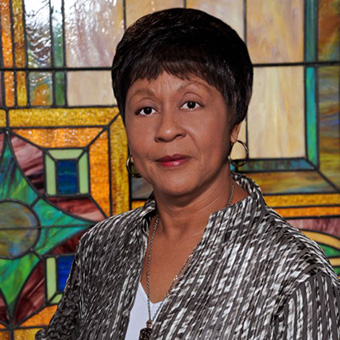 The evening’s theme, “While the World Watched,” is also the title of a memoir by McKinstry that details her life growing up in Birmingham, her involvement in the Birmingham Civil Rights Movement of the 1960s and lessons learned from her experiences.  The book also serves as a tool for her ongoing international and national travel and work in the ministry of reconciliation and forgiveness.

McKinstry, who previously spoke at Hope in 2011, attended the 16th Street Baptist Church.  As a teenager, she attended mass meetings and rallies held at the church.  She was also among the thousands of students sprayed with fire hoses during the 1963 marches in Birmingham.

She was at the church when the racially motivated bombing took place during the morning of Sunday, Sept. 15, 1963.  The explosion killed four girls, friends of hers, and injured more than 20 other members of the congregation.  She escaped injury only because she had just moments previously left the area that bore the brunt of the blast.  She endured a second explosion in 1964, when a bombing in her neighborhood destroyed a portion of her home.

McKinstry speaks around the country and internationally.  She has been interviewed by major media in the United States and abroad, and has been a consultant and participant in documentaries about the bombing and the 1963 marches.

She is an associate minister at Trinity Baptist Church.  She held management positions with Brown and Williamson Tobacco Company and Accenture Consulting, and is a retiree of BellSouth Telecommunications.

McKinstry is active with numerous volunteer activities and organizations.  Among other community service, she has been second vice president and program committee chair for the Birmingham Civil Rights Institute for the last six years, and she was president of the Board of Directors of Sixteenth Street Foundation Inc. for 10 years.  She serves on Samford University’s Board of Overseers and Samford’s Beeson Divinity School Advisory Board, and is also a past president of the Hospice Foundation of Jefferson County; past vice president and director of programs for The Academy of Fine Arts Inc.; and past member of the Governor’s Constitutional Revision Commission for Alabama.

She is a graduate of Fisk University, has done graduate studies at the University of Alabama in Birmingham, received a Master of Divinity degree from Samford University and a Doctor of Ministry degree from New York Theological Seminary.  She has received honors including a Doctor of Divinity degree from Samford University; the Septima Poinsette Clark award for service from Alpha Kappa Alpha Sorority Inc., of which she is an honorary member; the Rev. Vernon Dougherty Award from New York Theological Seminary’s Eleanor Moody-Shepherd Resource Center for Women; and the Rebecca Wood Service Award in recognition of outstanding service to the Breast Cancer Community and the New Light Support Group.

McKinstry’s presentation is sponsored by Herman Miller Inc. and the college’s Center for Diversity and Inclusion, multicultural student organizations and the GROW collaboration, and is taking place as part of the college’s annual Civil Rights Celebration week.  Running Monday-Saturday, Jan. 15-20, the week honors all persons and groups who have worked toward the advancement of civil rights and social justice, and is organized in conjunction with the national commemoration of the life of Dr. Martin Luther King Jr.

The week’s activities will close with a cast of faculty, staff and students presenting a staged reading of the play “Just Like Us,” which explores immigration issues particularly as they affect young people, on Saturday, Jan. 20, at 7 p.m. in the multipurpose room of St. Francis de Sales Catholic Church. It will also feature a variety of additional activities for the campus community, including a special “Time to Serve” opportunity for students at multiple community locations on Saturday, Jan. 20.