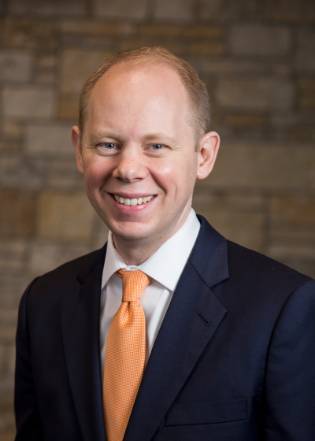 Hope College has selected an innovative leader from outside higher education as its 14th president, with the global search that the college conducted also having led to someone with strong Hope ties.

Matthew A. Scogin, who is chief administrative officer at the global financial advisory firm of Perella Weinberg Partners in New York City and has also held senior positions with both the New York Stock Exchange and U.S. Treasury Department, was elected by the college’s Board of Trustees on Friday, Dec. 7. A 2002 Hope graduate who is currently a member of the board, he will assume office on July 1, 2019.

See video, reflections, and more about president-elect Matthew A. Scogin '02

“As a strategic thinker who has worked on the most important economic and social issues facing our nation, Matt will bring intellectual depth and visionary leadership to Hope College,” said board chair Karl Droppers. “Matt personifies the mission of Hope, as he has led a life of leadership and service at the highest levels of business and government. He is also a passionate follower of Christ, brings a strong commitment to inclusive excellence and diversity, and articulates the college’s mission with contagious and inspiring enthusiasm. This makes him the perfect leader for Hope’s next chapter.”

Scogin was selected following an international search that yielded applicants from around the country and abroad, including presidents and senior administrators at other colleges and universities as well as in other professional fields.

“In a very strong candidate pool, Matt’s passion, commitment, and preparation to serve as Hope’s 14th president were evident to the search committee throughout the selection process,” said search-committee chair Suzanne Shier, who is also a member of the Board of Trustees. “His background, experience and leadership capacity embody the attributes for leadership identified in the candidate profile: Christ centered, mission oriented, academically minded, student focused, community builder, champion for diversity and inclusion, fundraiser, strategist, experienced executive and exceptional communicator.”

Scogin explained that it was Hope’s transformational impact on him, and his desire to give back, that prompted him to seek the presidency, a role that he has never considered pursuing anywhere else.

“As a proud and grateful alumnus, I believe in what Hope stands for and its ability to change a life. It changed mine,” he said. “Hope’s faculty invested in me, mentored me and taught me how to learn. Hope’s academics prepared me for a rigorous graduate school program at Harvard and a research fellowship in Germany. Hope’s liberal arts curriculum gave me the broad-based skills to pursue an interdisciplinary career in government, business and the non-profit sector. And Hope’s mission inspired me to view even my secular work as having a very sacred purpose.”

“It is with great humility and a deep sense of calling that I am so pleased to be returning to Hope College to help steward this great institution through the next chapter of its long, rich history and ensure that Hope continues to do for future generations what it did for my wife and me,” he said. “I am looking forward to opportunities to engage with the campus community between now and when I take office on July 1, and for the months ahead am especially grateful for the guidance and friendship offered by Dennis Voskuil, who because of his own love for Hope has graciously been serving as interim president since 2017.”

Scogin has been with Perella Weinberg Partners since 2014.  He oversees operations, strategy, corporate services, human resources and communications at the firm, which has 11 offices around the world.

Prior to his current position, he was at NYSE Euronext, where from 2009 to 2014 he served as the senior vice president and chief of staff at the 3,000-person company that ran the New York Stock Exchange and five exchanges in Europe. He served as a key member of the executive team and played a leading role in the overall strategic direction of the company during a time of tremendous change, while also overseeing the offices of Global Affairs and Government Relations and of Corporate Responsibility, and the Office of the CEO. During 2008 and 2009, he was chief of staff and senior adviser to the CEO of Wachovia Bank, at the time the nation’s fourth-largest commercial bank.

Before joining the corporate sector, Scogin occupied several senior roles in government. From 2006 to 2008, he was the senior advisor for domestic finance at the U.S. Department of Treasury, where he provided the secretary of the treasury and undersecretary of the treasury with counsel on a broad range of economic and financial policy matters. In 2006, he served as a fiscal policy adviser to the governor of Massachusetts; from 2002 to 2003, he was the legislative director for a Michigan state representative; and during 2001, while participating in Hope College’s Washington Honors Semester, he held an internship at the White House.

He majored in political science and economics at Hope, and has a master’s degree in public policy from the Kennedy School of Government at Harvard University. After finishing graduate school, he spent time in Germany as a fellow with the Robert Bosch Foundation studying unemployment and labor market policy. He has published several articles on issues related to public policy and finance.

He has also been extensively engaged in the life of the college since graduation, including serving as a member of the Board of Trustees since 2016. Among other involvement through the years, he spoke during a Hope Chapel service in September 2017, was the featured speaker in the Student Congress Speaker Series in March 2010 and was highlighted in an alumni profile in the 2008-09 Hope College Catalog. While on campus to receive his Young Alumni Award, he also presented a workshop on leadership development hosted by the Hope College Alumni Association. 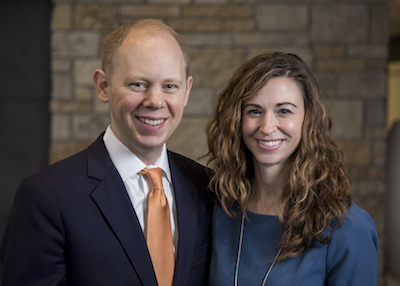 At 39 years old, Scogin ties founding president Philip Phelps as the college’s youngest president.   Phelps was likewise 39 when he was elected Hope’s first president, on Oct. 27, 1865, after serving since 1859 as principal of the Holland Academy from which Hope grew. Phelps was inaugurated on his 40th birthday, July 12, 1866. Scogin will turn 40 on Aug. 23, 2019, the day that the incoming Class of 2023 arrives on campus for New Student Orientation.

The college was assisted in identifying and researching candidates by AGB Search, based in Washington, D.C. The search began this past May following nearly a year of preparation.

Hope College is a four-year, co-educational, Christian liberal arts college located in Holland, Michigan, and has approximately 3,000 students from across the country and around the world. Founded in 1866 and affiliated with the Reformed Church in America, Hope offers courses in 91 majors, minors and pre-professional programs leading to a Bachelor of Arts, Bachelor of Music, Bachelor of Science or Bachelor of Science in Nursing degree. Among other distinctions, Hope has long been a recognized leader in collaborative faculty/student research and creativity; was the first private, four-year, undergraduate liberal arts college to earn national accreditation in all four of the arts (art, dance, theatre and visual art); and is featured in the book “Colleges That Change Lives.” More information is available at hope.edu.