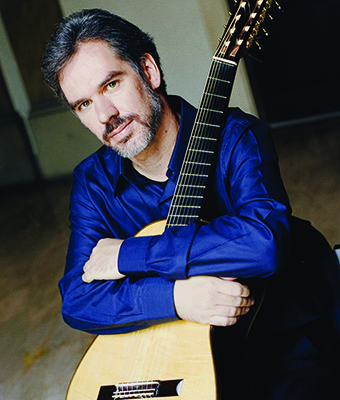 The Hope College Guitar Series will feature Paul Galbraith on Friday, March 1, at 7:30 p.m. in the Concert Hall of the Jack H. Miller Center for Musical Arts.

Galbraith has previously performed at Hope in 2004, 2010 and 2014. A frequent guest on National Public Radio’s “Performance Today,” and twice featured on “All Things Considered,” He was nominated for a 1998 Grammy Award for Best Solo Instrumental Album for his two-disc recording, “Complete Bach Violin Sonatas and Partitas.”  The album also reached the Top Ten on Billboard’s classical charts and received a “Four Star” rating in Stereo Review.

“A textbook case of the living, breathing art of classical music,” Billboard Magazine has said.

Internationally renowned as an innovator of the classical guitar, Galbraith has been working since the 1980s towards expanding the technical limits of his instrument, besides augmenting the quantity and quality of its repertoire.

His efforts have already resulted in a series of critically acclaimed recordings of works by Bach, Haydn and Brahms, along with his own arrangements of folk tunes from various countries. By exchanging the traditional guitar for the eight-string Brahms Guitar, which he helped develop, Galbraith found the ideal instrument with which to interpret challenging classical transcriptions.

In his unique playing style, the guitar (which has two extra strings, one high, one low) is supported by a metal endpin, similar to that of a cello that rests on a wooden resonance box. Both the guitar’s design and Galbraith’s playing style are considered groundbreaking development in the history of the instrument, increasing its range to an unprecedented extent.

“I’ve never heard anyone play like this,” wrote a reviewer for Classical Guitar Magazine. “Everything sounded like a masterpiece.”

Lauded for his “exceptional artistry” by The New Yorker for music-making described as “pure magic” by the “Santa Barbara News-Press,” Galbraith won the Silver Medal at the Segovia International Guitar Competition at the age of 17. Andrés Segovia, who was present, called his playing “magnificent.”  The award helped launch an international career including engagements with some of the finest orchestras in Britain and Europe.

Individual tickets for the concert are $10 for regular admission, $7 for senior citizens and Hope faculty and staff, and $5 for students 18 and under. Tickets are available at hope.edu/tickets as well as at the ticket office in the Events and Conferences Office located downtown in the Anderson-Werkman Financial Center (100 E. Eighth St.). The ticket office is open weekdays from 9 a.m. to 5 p.m. and can be called at 616-395-7890.