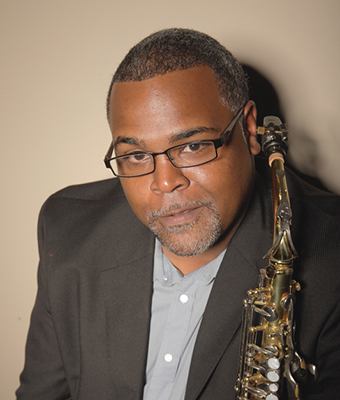 The combined concert and keynote lecture “Jazz in the Fight for Civil Rights: Jazz as Activist Music” on Tuesday, Feb. 4, featuring visiting musician and scholar Dr. Damani Phillips of the University of Iowa faculty as well as area vocal and jazz ensembles, will headline multiple activities at Hope College scheduled in conjunction with national Black History Month.

The public is invited to all of the events.  Admission is free.

“Jazz in the Fight for Civil Rights: Jazz as Activist Music” will be presented on Tuesday, Feb. 4, at 5:30 p.m. in the Concert Hall of the Jack H. Miller Center for Musical Arts.  Through the combined use of live performance, spoken remarks and a visual display, the evening will highlight the way that many musicians joined African Americans in using their musical voice as a catalyst in demanding change during the Civil Rights movement.  As explained in the program’s description, while popular artists such as Aretha Franklin, Marvin Gaye and James Brown were more overt in voicing their opposition to the status quo through their music, many overlook the more subtle sonic contributions that jazz musicians made to the cause.

In addition to Phillips, the event will feature the Holland Concert Jazz Orchestra and Hope College Jazz Arts Collective, both directed by Dr. Jordan VanHemert of the Hope music faculty; and Hope College Community Gospel Choir, directed by C.J. Kingdom-Grier.  The choir will open the evening with “Lift Every Voice and Sing,” by James Weldon Johnson.  Other works on the program will include “What’s Going On?,” by Marvin Gaye; “A-That’s Freedom,” by Thad Jones; “Strange Fruit,” by Abel Meeropol; parts I and IV of “Black Brown and Beige Suite,” by Duke Ellington; “Fables of Faubus,” by Charles Mingus; “Mississippi Goddam,” by Nina Simone; and “Alabama,” by John Coltrane.

A variety of public events commemorating Black History Month, which is February, will precede and follow the Feb. 4 concert-lecture, including later that evening.

On Thursday, Feb. 6, at 4 p.m., Chicago-based artist Nate Young will discuss his work in conjunction with the exhibition “(re)collection,” which reflects on the African American experience during the Great Migration of the 20th century and is on display in the De Pree Art Center and Gallery.  The exhibition opened on Monday, Jan. 6, and is continuing through Thursday, Feb. 6.  Following Young’s talk, which will be in Cook Auditorium in the De Pree Art Center and Gallery, there will be a closing reception in the gallery from 5 p.m. to 6:30 p.m.  The gallery is open Mondays through Saturdays from 10 a.m. to 5 p.m., and Sundays from 1 p.m. to 5 p.m.

In addition to the other events, the Kruizenga Art Museum is featuring work by African American artists from the college’s Permanent Collection in a focus exhibition from Friday, Jan. 17, through Saturday, April 25.   The exhibition is running alongside “Resilience, Resistance and Revival in 20th-Century Yoruba Art,” which examines the survival and evolution of Yoruba art and culture in Nigeria through the periods of British colonization and post-colonial independence and is on display from Friday, Jan. 17, through Saturday, May 16. The museum is open Tuesdays through Saturdays from 10 a.m. to 4 p.m.

Phillips is director of jazz studies and associate professor of African American studies at the University of Iowa, where he teaches applied jazz saxophone, directs jazz combos, and teaches courses in African American music, African American culture, jazz education and improvisation.  He will be on campus on Sunday-Wednesday, Feb. 2-5, as the college’s Hurtgen Jazz Artist in Residence, and during his visit will also make presentations in a variety of courses, lead masterclasses for Hope jazz students and area high school students, and teach individual lessons to Hope jazz and saxophone students.  His Feb. 4 keynote address is being co-sponsored by the college’s Department of Music via the residency and by the college’s Center for Diversity and Inclusion, and Black Student Union.

An active performer, pedagogue and composer, he has taught and performed throughout the United States, Europe, Asia and South America. He previously served on the full time faculty of Grinnell College, the adjunct faculty of Oakland University and Macomb Community College, and is actively sought as a guest artist, clinician, lecturer, panelist and adjudicator throughout the country.

As a lecturer, Phillips has presented on a variety of topics on jazz and black music’s association with American culture at venues such as The African-American Museum of Iowa, the Deutschebank Kunsthalle of Berlin, Germany, and well over a dozen colleges and universities within the United States.

As a performer, he has shared the stage with artists/groups such as Lewis Nash, Christian McBride, Wycliffe Gordon, Bobby McFerrin, Marcus Belgrave, Terrell Stafford, Maceo Parker, Pat Bianchi, Bobby Floyd, The Temptations, Red Holloway, Hank Jones and many others.

As a recording artist, Phillips released his debut CD “Yaktown Nights” in 2003, “The String Theory” in November of 2010 and “The Reckoning” (featuring New York standouts Pat Bianchi - organ, Greg Gisbert – tpt and Lewis Nash - dr) in 2012. His 2015 recording project “Duality” is a double album featuring a unique synergy between straight-ahead jazz and hip hop music. Phillips’ brand new live recording “Live in Iowa” was released in January of 2018.

He is also an active academic scholar, with scholarly presentations at colleges, universities, professional/civic conferences and scholarly forums both domestically and abroad to his credit. His research focuses on addressing cultural concerns in the pedagogy of black music within academia. He published his first book titled “What is This Thing Called Soul: Conversations on Jazz and Black Culture” in 2017, which delves into the difficult topic of the decline of black cultural influence/representation in jazz as traditionally taught in academic spheres.