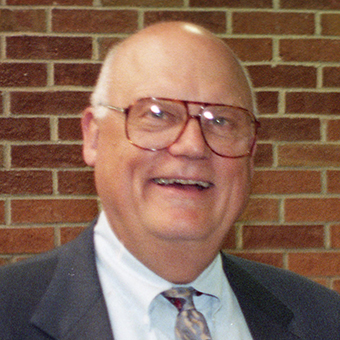 During his time at the college, the Council for Advancement and Support of Education (CASE) recognized Hope during both the 1987-88 and 1988-89 academic years for having the best total development program among American colleges and universities with more than 10,000 alumni.  In 1994, he was presented the “Benjamin Franklin Award for a Fund Raising Executive” from the West Michigan Chapter of the National Society of Fund Raising Executives.

He joined the Hope development staff in 1975 after serving the Reformed Church in America as a pastor in Belle Mead, New Jersey, and Zeeland, and was named director of development in 1982.  When he left the college, he joined the staff of neighboring Western Theological Seminary, from which he had graduated in 1963, to direct a capital fund raising campaign.

Upon his departure from Hope, longtime colleague Robert N. DeYoung ’56, who was vice president for college advancement, praised his service and impact, noting, “John has been a significant part of Hope College advancement.  He played a major role in helping us develop the organization we have today, which has been recognized as one of the finest.”

The obituary which follows is from the Yntema Funeral Home website.  For more, please see the story about him published in the Winter 2014 issue of Western Theological Seminary’s publication The Commons when the seminary presented him with a Distinguished Alumni Award.

Those who knew John Nordstrom knew he was a big man, both figuratively and literally. He loved big ideas, big pieces of peach pie (with crumbly topping), and the big sound of pipe organs. He had a big heart and loved his family and friends fiercely.

John was born in Chicago. After graduating from the University of Illinois/Champaign with a degree in labor economics, John worked for the Chicago Tribune. In 1955, he married Eileen Mugg, also a Chicagoan. During that time, conversations with a close friend introduced John to thoughts about faith and ministry.

In 1960, John packed up Eileen and his two young daughters and moved to Holland, where he attended Western Theological Seminary. Upon graduation, John once again packed up Eileen and now three daughters to begin a career that he was truly called to. As pastor of the Harlingen Reformed Church in Belle Mead, New Jersey, John found joy in the life of a pastor. But it was especially in the pulpit that John’s big ideas and faith came to life. He loved to write and preach. He enjoyed researching theologians and philosophers and selecting hymns that complemented his sermons. While in New Jersey, John also attended Princeton Theological Seminary where he earned a Master of Theological Studies degree.

Then in 1969, a church in Michigan with a significantly larger congregation offered John a senior pastor position. It was a great opportunity and one that put the family closer to its Chicago relatives. John, Eileen, and now four daughters moved to Zeeland, where he settled in as pastor of the Second Reformed Church. He continued to write and deliver eloquent sermons that explored the intersections of faith, biblical scholarship, and topical social issues.

When John left the ministry and joined the administration of Hope College as its director of development, he was able to dovetail his two careers; carrying out the business of fundraising for a college supported by the Reformed Church was an extension of John’s faith. He found meaning and pride in his work, and for 20 years built a development program that included Hope's first-ever phone-a-thons and hilarious stories about his travels across the country.

After retiring from Hope, John remained active in the local nonprofit community as a development consultant. John served as president of the Community Foundation of Holland/Zeeland (CFHZ), president and member of the West Ottawa School Board, president and member of the Holland Historical Trust Board, and was a founding member of the OAR board (Ottagon Addiction Recovery). He received the Lindeman award from HZCF, a Distinguished Alumni award from Western Theological Seminary, and a 7 Over 70 award from Resthaven. John and Eileen were active in HASP, Century Club and the Holland Symphony. They were members of Third Reformed Church in Holland.

John was called to be a pastor, and anyone who heard him preach knows this to be true. And while he left the ministry, he never stopped being a minister. He practiced his faith, mentored many, felt the awesome gift of grace, and continued to preach and marry and bury friends and family. We remember his booming voice, his big laugh, his big smile. We remember his love of his “Leenie,” with whom he was married for 65 years; his pride in being father to Linda, Nancy, Martha and Jane; and his cherished friendships. He loved tennis, winter visits to Seaside, Florida, and summers at Les Cheneaux Landing in the Upper Peninsula. John was a member of ROMEOs and greatly enjoyed his Wednesday lunches with the guys.

A light has gone out in our family, but we will never forget how it feels to be loved and to love our dearest husband, father, brother, grandfather, great-grandfather, uncle, and friend. John was predeceased by his beloved sister Elisabeth Carlson and brothers-in-law Robert Carlson and Skip (Henry) Mugg. He is survived by Eileen; Linda and Steve Boeve, Nancy Nordstrom, Martha Kuyten, and Jane and Phil Eppard; Don and Nicole Strabbing, Rich and Sasha Strabbing, Clay and Kelsey Boersma, Kellen Boersma and Anna Battistello, Katie and Andy Queenan, Naomi Kuyten, Gabe Kuyten, Daishawn Kuyten, Madeline Eppard, and Aidan Eppard; Wally and Dianne Mugg and Carol Mugg; 12 great grandchildren; and an abundance of precious nieces, nephews, and friends.

A memorial will take place at a later time.

Memorial contributions can be made in John’s honor to: