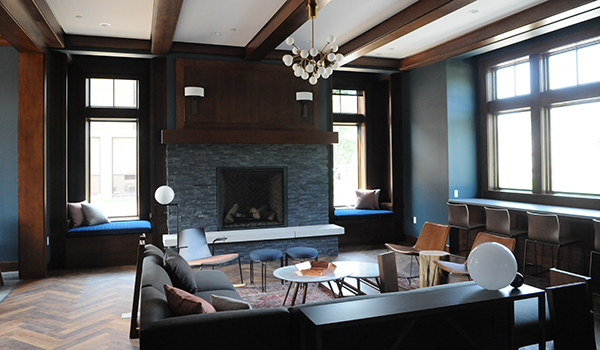 The Campus Ministries house that opened at Hope College this past fall has been recognized by the U.S. Green Building Council with LEED v4 certification based on the sustainability of its materials, systems and utility use.

It is the third building on campus to earn LEED certification.  The others are the Jack H. Miller Center for Musical Arts (LEED Silver), which opened in August 2015; and the Jim and Martie Bultman Student Center (LEED Gold), which opened in the fall of 2017.

“For us here at Hope, LEED certification is an aspiration as well as an outcome,” said Kara Slater, who is director of operations at the college and is a LEED accredited professional (LEED AP).  “It’s meaningful to us to have earned the certification by meeting the standards set by the U.S. Green Building Council, but at the root our commitment is to do the right things to minimize our impact on the environment and emphasize stewardship and sustainability in our capital projects and as well as our operations.”

Standing in the central campus, the 11,000-square-foot, two-story building includes small and large gathering spaces, a commons area, a library that can also be used for meetings, a prayer alcove and expanded office space for the staff, which was previously spread among other locations.  It has been named the van Andel Huys der Hope in honor of a leadership gift from the David and Carol Van Andel Family Foundation.

According to Slater, a variety of characteristics of the building’s construction, design and operation helped earn the certification.  Among others:

Completely funded through gifts to Hope, the new building was part of the college’s “Faith Formation Initiative,” a “micro campaign” that also provided endowment for a new chaplain in athletics and for programming.  The total project cost was $6 million, including the site preparation, construction, and an endowment for ongoing maintenance and building operations.  Architectural design was by AMDG Architects of Grand Rapids, and the construction manager was Lakewood Construction of Holland.

The building succeeded the Keppel House on 10th street, a stately former residence which had housed the program since 1994 but became inadequate as Campus Ministries programming and student interest have grown.