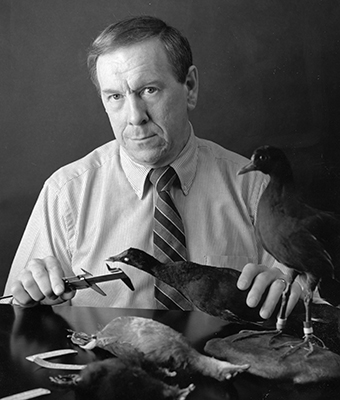 Dr. Eldon D. Greij of Holland, Michigan, a professor emeritus of biology and ornithologist who was also the founding editor and publisher of Birder’s World magazine, died on Sunday, Oct. 24, 2021. He was 84.

Greij served as a member of the Hope biology faculty from 1962 to 2003. He was named the inaugural recipient of the college’s Edward and Elizabeth Hofma Endowed Professorship in 1982.

During his time at Hope, he published one of the first 10 papers from the Department of Biology; obtained several National Science Foundation Undergraduate Research Participation grants, which allowed for a major expansion of the department’s summer research program; and chaired the department. Courses he taught included Human Ecology, Ecology, Ornithology and Field Studies in Biology.  His research focus included a study of the biology of the Common Gallinule, for which he and his students spent many hours in the marshes associated with Lake Macatawa.

Wishing to broaden his educational impact, he established Birders World in 1987.  The magazine continues today as BirdWatching Magazine.  He continued to be involved with the publication after he stopped serving as editor in 1998, and he wrote the column “Those Amazing Birds” in every issue through November/December 2021.

He remained active in the life of the college in retirement, leading trips to Africa focused on birding and other wildlife for alumni and friends of the college.  He also continued to write and lecture.

There will be a Celebration of Life on Friday, Nov. 5, at 11 a.m. at Christ Memorial Church in Holland, located at 595 Graafschap Rd., immediately south of the intersection of Graafschap and 24th Street.