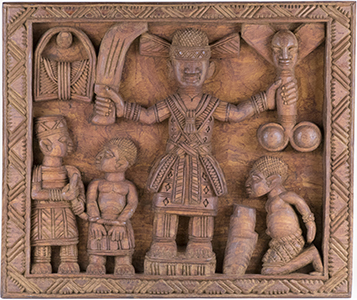 Resilience, Resistance and Revival in 20th-Century Yoruba Art examines the survival and evolution of Yoruba art and culture in Nigeria through the periods of British colonization and post-colonial independence. The artworks included in the exhibition illustrate how Yoruba art has been shaped by the twin forces of continuity and change through the 20th and into the 21st centuries.

The Yoruba are one of the largest ethnic groups in West Africa, numbering more than 40 million people. Most Yoruba live in southwestern Nigeria, where from the 12th to 18th centuries the Yoruba kingdoms of Ife and Oyo ranked among the most powerful states in West Africa. In the 19th century a series of civil wars and conflicts with neighboring ethnic groups left the Yoruba vulnerable to invasion and colonization by European powers. Yoruba lands and people largely came under the power of Great Britain, and British rule affected every aspect of Yoruba society and culture. In the arts, the diminished power and wealth of Yoruba rulers, the conversion of many Yoruba to Christianity and Islam, and the introduction of foreign manufactured goods all served to undermine the demand for and traditions associated with both secular and religious Yoruba art. However, despite the negative effects of colonization, Yoruba art endured and contributed to an increasing sense of Yoruba ethnic pride during the colonial period. 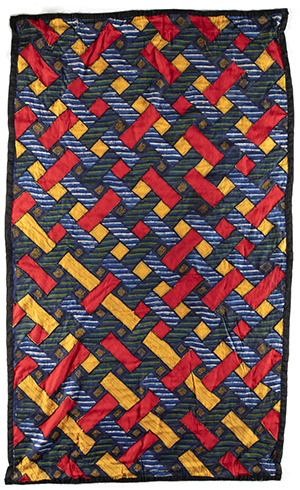 Resilience, Resistance and Revival was organized by the Kruizenga Art Museum in conjunction with Hope College Art History Professor Anne Heath and the students from her Spring 2019 Art 360 Class: Nina Kay, Sylvia Rodriguez, Holle Wade and Caleigh White. The museum is grateful to Professor Heath and her students for the research and presentation ideas that underpin this exhibition. The museum is also immensely grateful to all of the donors and lenders who made this exhibition possible: especially Dr. Bruce and Ann Haight of Grand Rapids, Mich., as well as Mary Vande Poel ’59 of Zeeland, Mich.; Leif Jacobsen ’60 of Sarasota, Fl.; Dr. Neal ’68 and Elizabeth Sobania of Lakewood, Wa.; and Yorgo and Kelly Demtrakopoulos of Kalamazoo, Mich.

The exhibition is accompanied by a fully illustrated digital catalog that can be downloaded free of charge from the Kruizenga Museum website.

As a teaching museum, the Kruizenga Art Museum strives to be a center for curiosity, inspiration and cultural exploration. By displaying artworks from a wide range of cultures and historical periods, the museum aims to foster the qualities of empathy, tolerance and understanding in all of our visitors.

Thanks to the generosity of our patrons, the Kruizenga Museum’s collection is constantly growing. In an increasingly diverse and global age, it is important for the Kruizenga to collect and exhibit images and objects that can help tell as many different stories as possible. The Kruizenga Museum collection reflects patterns of cross-cultural exchange that in some cases are centuries old and yet continue to shape our world today. We welcome you to explore this exhibition with an open mind. The exhibition was not designed to be seen in a certain sequence and we encourage you to draw your own connections between the artworks. If you have any comments or questions about the exhibition or the Kruizenga Museum collection, please contact a museum staff member.

The Kruizenga Art Museum galleries are typically installed with a mix of temporary exhibitions and permanent collection displays. These exhibitions and displays are planned to complement course offerings in the college’s academic curriculum and usually change, partially or completely, at the beginning of each semester.

The museum’s exhibitions are further augmented by lectures, artist demonstrations, film series, musical concerts, dance and theater performances and other relevant educational programs. An endowment gift from Holland residents Dave and Jane Armstrong provides funding for at least one exhibition-related lecture every year, while other programs are made possible through annual gifts and campus partnerships.

View all upcoming exhibitions and events

Experience it in person. Visit the KAM today!