History of the Stained Glass

Dimnent Memorial Chapel has some of the most beautiful stained glass windows in Michigan. 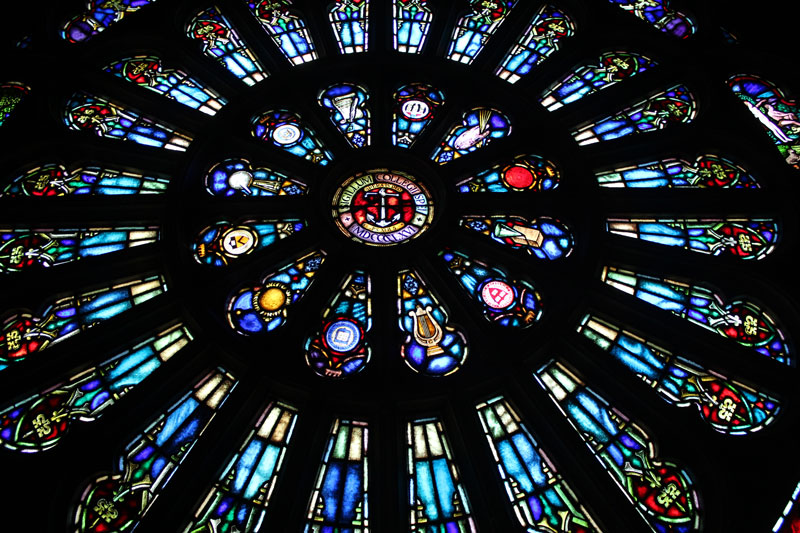 There are six windows each on the north and south sides of the building, a large chancel or lattice window in the background of the stage on the east side, and a rose window above the entrance on the west side. The windows highlight Biblical figures accented by medallions and shields significant in church history.

Read more about each of the windows below.

The beautiful rose window, a gift from the Hope College Class of 1916 and constructed at a cost of $4,000, is located on the west wall above the balcony and contains three rows of petals.

The row around the Hope College seal has six university seals portraying historic education. The first is the coat of arms of the University of Leiden in the Netherlands. This is the university attended by the Rev. Albertus C. Van Raalte, who was instrumental in the establishment of Hope College. The others are from American universities – Rutgers, Harvard, Yale, Princeton and the University of Michigan. These seals are interspersed with academic symbols – a palette portraying the fine arts; a metric figure for geometry; a harp for music; a blazing sun for astronomy; chemical equipment for chemistry; and a scroll and pen for literature. Note: It was discovered years after the window was installed that the founding date of the University of Michigan is incorrect. It is 1817.

The center contains the Hope College seal. An anchor, the symbol of Hope College, is highlighted in the middle. The name, seal and motto of Hope College were derived from a statement by the Rev. Albertus C. Van Raalte, “This is my anchor of hope for this people in the future.” The college motto, Spera in Deo (Hope in God), is taken from Psalm 42:5.

The outside row of 12 windows tells the story of Christianity, from the Creation to the birth of Christ.

Using glass imported from France and Italy, Dimnent’s stained glass windows were created by the George Hardy Payne Studio in Paterson, New Jersey, and installed during the building’s construction in 1927–29.

The principal artist was Signor G.A. Zucci, an Austrian from Venice, Italy. He was selected because of his knowledge and skill in European cathedral and antique designs. His draughtmanship and color work received the highest tribute throughout Italy and Eastern Europe.

A major preservation and restoration of the windows by the Hauser Art Glass Company of Winona, Minnesota, took place in 2000.

De Pree Art Center and Gallery: Movement with the Marks

De Pree Art Center and Gallery: Movement with the Marks

David Myers, professor of psychology, on how long should a teen be held accountable for their worst moments.