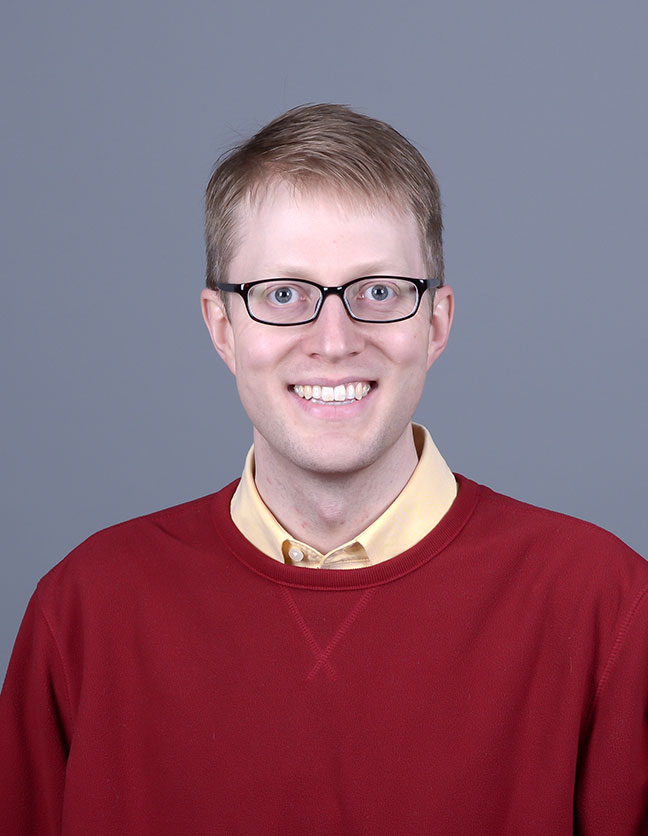 Dr. Paul Pearson has been teaching at Hope since 2012. He enjoys teaching a variety of pure mathematics, applied mathematics and statistics courses. His research interests include machine learning and topological data analysis, and developing new methods of data analysis for interdisciplinary projects.

Paul is very active in undergraduate research at Hope and is committed to promoting diversity in the mathematical sciences. He does summer research with undergraduate students on a wide variety of interdisciplinary projects in data science. Past student research projects have been in mathematical biology (analyzing bean beetle egg development, identifying kinds of birds singing in recordings), computational chemistry (predicting changes in Gibbs free energy in proteins) and high-dimensional data analysis (automated handwritten digit classification).

He frequently travels with students to conferences, such as:

Paul has made extensive contributions to the STEM community through external service to professional societies. He is a developer and problem author for the MAA-sponsored online homework system WeBWorK, used by more than 750 colleges and universities worldwide. He has written over 1,500 homework problems and developed more than 10 new macros for WeBWorK, some of which have interactive learning features for students. He has team-taught several workshops on how to use WeBWorK in teaching at the Joint Mathematics Meetings of the AMS and MAA, the largest annual math conference in the U.S., as well as several MAA PREP workshops on how to author WeBWorK questions. Paul is Hope's campus representative on the Executive Committee of the Midstates Consortium for Math and Science. He is also the webmaster for the Midstates Consortium and the Michigan section of the MAA. As a Phi Beta Kappa member, Paul also enjoys helping with Hope's PBK chapter.

In his graduate studies in algebraic topology, Paul examined the structure of high-dimensional spaces by computing and analyzing the structure of their algebraic invariants. His research interests have broadened to include studying the shape of high-dimensional data sets (topological data analysis) and using machine learning for interdisciplinary research projects that engage undergraduates.

Paul's research student Jiyi Jiang won an outstanding presentation award at the 2015 Mathematical Association of America (MAA) MathFest, the second largest annual math conference in the U.S. Also, his research students Allison VanderStoep and Taylor Rink each won a Janet L. Andersen Award for Undergraduate Research in Mathematical or Computational Biology at the 2016 MAA MathFest. The award is named after Dr. Janet Andersen, a former Hope College Mathematics professor who was a strong supporter of undergraduate research and mathematical biology until her untimely death in 2005.

Paul delivered an invited talk "Gene Clusters" at the 2012 MAA MathFest session for Applied Computational Topology and has delivered numerous talks at MAA MathFest, the Joint Math Meetings of the AMS and MAA, the Michigan Section MAA annual meeting and at math seminars at Hope, Calvin and Wayne State University.

Paul likes to hike, bike, kayak and camp outdoors. He also loves to sing in the Hope College Chorus both for Christmas Vespers and the Spring Concert and to sing and ring bells in the Hope Church choir and handbell choir. As an environmentalist, Paul enjoys walking or biking to work. He also enjoys spending time with his niece and nephew by playing games with them and teaching them cool science stuff.