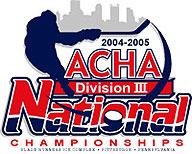 The Dutchmen posted a 2-2 record in the four-day, 16-team tournament.

The teams each scored twice in the first period, Hope's coming from senior George Dickinson (Ann Arbor, Mich.) and freshman Jonathan Shaver (Wayne, Ill.). Neither team scored in the second or third periods and the game-winner didn't come until there were 32 seconds remaining in overtime.

Instead, the Dutchmen will be playing for third place on Saturday against Penn State-Berks.

The top-seeded Dutchmen and third-seeded Gulf Coast exchanged goals throughout the game. The teams were tied 1-1 after the first period and 3-3 after the second. Early in the third period the teams were tied 4-4 when Gulf Coast gained the edge with a goal. The outcome was decided when the Florida scored on Hope's emptied net in the closing seconds. Hope held a 37-32 advantage in shots on goal.

After battling Wright State, Ohio to a 2-2 regulation tie and a scoreless overtime on Thursday afternoon, the Flying Dutchmen won in a five-shot shootout by a single goal (2-1).

The tournament is being held at the Blade Runners Ice Complex in Pittsburgh. Hope is making its fourth straight trip to the national tournament. The Flying Dutchmen finished fifth at nationals in 2004 and were national runner-ups in 2003. They also finished fifth in their first appearance in 2002.

The Flying Dutchmen (22-3-1) headed into the 16-team, four-day tournament top-seeded. Hope advances in the winners bracket for a Thursday game against Wright State, Ohio. Back in November Hope defeated Wright State 8-2.

The teams exchanged a pair of goals in the opening minutes of the game before Hope took control pulling to a 5-2 advantage at the end of the first period. The Flying Dutchmen scored two unanswered goals in the second period to gain a 7-2 advantage. Each team scored twice in the third period.

Freshman goalkeeper Paul Cynar (Dexter, Mich.) was in the net the entire game.