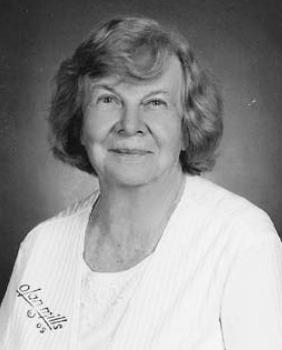 The Jacobsons retired in 1999 where they continued in teaching and church service.

"Martie and I were so saddened to learn of Jeanne's illness and her death which so soon followed.  Like her husband John, Jeanne left a legacy of initiatives at Hope that will positively influence the life of the college for generations to come," said Hope College President James E. Bultman.

Dr. Jacobson earned a Bachelor's degree in English literature in 1953 from Swarthmore College, a Master's degree in Reading Education in 1973 from SUNY Brockport, and a Ph.D. in Education Psychology and Statistics in 1981 from SUNY Albany.  After college she taught kindergarten and then became head teacher of three-year-olds at the Yale Child Study Center.  Subsequently she ran her own nursery school, worked as a reading teacher in the public schools, and served as a private school principal.  When she moved to Michigan with her husband in 1987, she joined the faculty of Western Michigan University in the Department of Educational and Professional Development.  In 1996, she became a Senior Research Fellow at the A.C. Van Raalte Institute in Holland.

"Dr. Jacobson was a highly respected Senior Research Fellow of the Van Raalte Institute.  Not only was she an active researcher, contributing two major essays to books published through the Institute during the past two years, but she also provided invaluable service for many years as the editor of the Annual Report of the Institute.  We will miss her keen intellect, her passionate pursuit of excellence, her personal warmth, and her enduring friendship," said Dr. Jacob E. Nyenhuis, Director of the Van Raalte Institute.

The Hope College Board of Trustees established an endowed chair in honor of the Jacobsons in 1999, as a retirement recognition.

Dr. Jacobson is the author of Content Area Reading: Integration with the Language Arts, and a co-author of Albertus C. Van Raalte: Dutch Leader and American Patriot, A Dream Fulfilled: The Van Raalte Sculpture in Centennial Park and Detecta-Crostics: Puzzles of Mystery.

A private memorial service, for immediate family, will be held in the Siesta Key Memorial Garden and conducted by Dr. Karl Kling, pastor of Bee Ridge Presbyterian Church, where Dr. Jacobson was a member, and by Dr. Margaret Towner, a long-time friend.  In lieu of flowers, donations may be made to Swarthmore College or to the Heifer Project.