New Soccer Facility Location Excavation: Can It Really Be A Tunnel? 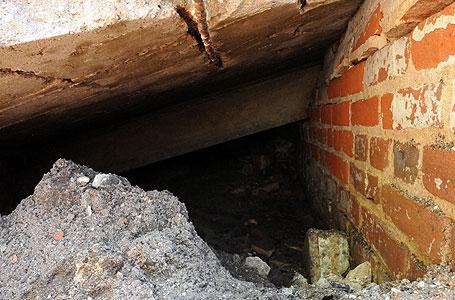 The answer is YES!! Excavators working at Hope's new soccer stadium project earlier this week unearthed what appears to be a tunnel on what years ago was the homestead of Holland and Hope College founder Albertus C. Van Raalte.

The answer is YES!! Excavators working at Hope's new soccer stadium project earlier this week unearthed what appears to be a tunnel on what years ago was the homestead of Holland and Hope College founder Albertus C. Van Raalte.

The Van Raalte home, first a red cedar wood structure built in 1847 and later (approximately 1876) expanded to a brick veneer structure containing 21 rooms, stood empty for many years. In 1947 the Van Raalte homestead property consisting of seven acres was donated to Hope College by then-owner William Eerdmans of Grand Rapids. At that time it was hoped that the home could be preserved. By the early 1960s it had fallen into such disrepair that the college decided to demolish it to make way for an expanded outdoor athletics complex.

But How About the Tunnel?

There was indeed a tunnel connecting the Van Raalte home to a nearby out-building as reported in the October 16, 1947, issue of The Anchor, Hope's student newspaper. Two enterprising Hope students reported in the newspaper of their exploratory escapade:

...There was not a person anywhere on the premises, so, beginning with the front door, we tried to open all the doors along the wide front and south side porches. However, just as we expected, they were tightly locked. Running around to the back of the house, we pushed with all our college-developed strength against three or four back doors. But all our attempts were in vain. We walked backward slowly in order to get a better view of the house from the rear. Suddenly Judy tumbled to the ground and emitted a terrifying scream! The level ground had dropped about two feet, and there, right next to her, was a large circular opening in the earth which looked like the end of a huge pipeline. Perhaps this was a way into the old house.

I stepped into the dark tunnel, and waving my arms in front of me to clear away the spiderwebs, I proceeded in little baby steps the entire length of the tunnel. After stumbling a lot for about twenty-five feet, I found myself in a dimly lit room in the basement. I called to Judy that it was safe for her to come, and together we made our way to the basement stairs. We were beginning to tingle with excitement and decided that since we had come this far, we wouldn't leave until we had pried through the whole house...

On the first floor, where we found all the rooms empty, were a kitchen, living room with fireplace, a dining room and several rooms which served as bedrooms...We even found an old bear skin in a heap on the floor in front of an old-fashioned dresser...It was on the third floor that we spent most of our time...We parked ourselves in the middle of the floor and read exciting (newspaper) stories about the new train travel to California, the then-current affairs in Congress, and the aftermath of the Civil War...And it was when we picked up some doctor's bills and checks in Dr. Van Raalte's own handwriting that the Dutch blood began to pulsate a little faster in our veins. How thrilling to think that here we were sitting on the third floor of a house one hundred years old and actually handling some papers written by our famous forefather!

...Leaving everything just as we had found it, we tiptoed down all the stairs and outside by the same way we had entered. We were glad to get away from the musty atmosphere and took a quick run to the sparkling creek which flows through the woods behind the house...

...If you would like to see this place for yourself, take a stroll in that direction some lovely afternoon before "the powers to be" bar our secret passageway into the historical shrine.