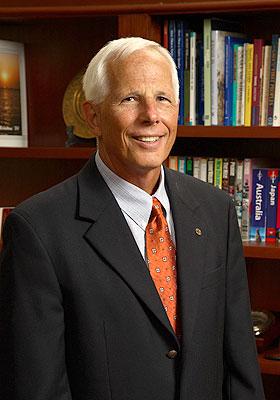 Dr. James Boelkins, provost and professor of biology at Hope  College, has announced that he will retire at the end of the new academic year.

Boelkins made the announcement to members of the Hope College faculty during the annual pre-college Provost's Address.

Boelkins has served at Hope since 2002.  A 1966 Hope graduate, he has worked in higher education administration for more than 30 years, including 25 years as the chief academic officer at Hope and other institutions.

"Jim Boelkins has had a distinguished quarter-of-century career as chief academic officer at collegiate institutions," Bultman said.  "It has been my great good fortune and that of Hope for him to serve these last eight years as provost at Hope."

"Jim is the consummate provost," Bultman said.  "He is faithfully committed to our mission, is a superb leader and administrator, sets high standards for himself and others, and sees both the big and small pictures in higher education.  He prizes great teaching as well as scholarly research and creativity.  His work ethic is extraordinary."

"Jim will be greatly missed as a colleague and friend, but we will savor this final year together even as we address several exciting initiatives yet to be fulfilled," Bultman said.

Boelkins's tenure as provost has been an active time in the college's academic life, with Hope adding two academic majors and seven minors, and receiving more than $23 million in external grants and spending more than $83.5 million to construct or renovate academic buildings. The college has hired 83 faculty, with 27 members of the faculty retiring.

Among other signs of academic excellence, a recent report by ResearchCrossroads found that Hope held more funding from the National Science Foundation and the National Institutes of Health than any other liberal arts college in Michigan.  Hope is the only private, four-year liberal arts college in the United States with national accreditation in art, dance, music and theatre.

In addition to his service at Hope, he is active in professional associations and local organizations.  Among other activities, he chairs the Great Lakes Colleges Association Deans' Council, the Advisory Committee of the Van Andel Institute Graduate School, chairs the Board of Directors of Wedgwood Christian Services, and is active in his church.

Boelkins, who turned 65 in early August, noted that has treasured his time at Hope, but that after more than three decades in senior administration he is ready to step away from the demands of his profession and spend more time with family.

"I have loved doing this job and Hope has been an extraordinary place in which to serve," he said.  "It's not hard to be a provost when you have so many productive faculty who are fun to serve.  I've had the privilege of working with an outstanding president and administrative team.  My office staff is simply the best.  Still, it's time for me to allow someone else to bring new ideas and vigor to this role at Hope."

Boelkins came to Hope from Grand Valley State University, where he had been since July 2000 and was serving as vice provost of the Pew Campus in Grand Rapids.  He was previously with Geneva College in Beaver Falls, Pa., for 15 years, first as vice president for academic affairs and then, starting in 1992, as provost.

From 1972 to 1975, and from 1977 to 1985, he was a member of the faculty of the University of North Dakota School of Medicine, Grand Forks, where he chaired and developed a new department of pharmacology. He received a variety of awards at the university, including recognition in both 1978 and 1983 as the Outstanding Basic
Science Teacher.

From 1975 to 1977, Boelkins was a member of the pharmacology faculty t Southern Illinois University School of Medicine. He was also a postdoctoral fellow at The Pennsylvania State University during 1971-72.

He was an elected member of several national scientific organizations and published research during his tenure in the medical schools.

He and his wife, Barbara, who also attended Hope, have three grown children.