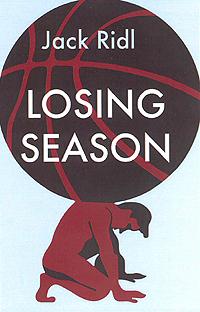 Basketball has been described by some as "poetry in motion."  The world of high school basketball is shared through poetry itself in the latest collection by nationally-recognized poet Jack Ridl, professor emeritus of English at Hope College.

Ridl's collection "Losing Season," by CavanKerry Press, follows a fictional, small-town high school team and its community in an experience lived out annually for decades across the country.  Capturing the perspective of a mix of participants - coach, players, family, fans - and chronicling highs and lows along the way, the individual poems together create a composite view of a year of hope and defeat both on and off the basketball court.

"I've never seen a poetry book as clearly focused as this one, as though a smart documentary filmmaker had hung around the gym all season filming until we can see and feel every hole and knot in the sad fabric of that failed year," he said.  "These poems are so compelling, so varied, so familiar to anyone who has felt the impact of high school sports that they may well introduce a new genre."

Ridl's writing is informed by his perspective growing up as the son of acclaimed basketball coach C.G. "Buzz" Ridl, who had coached at both the University of Pittsburgh and WestminsterCollege.  Through the years he has written dozens of sports-themed poems and essays that have been published broadly.  In 2007, he was named one of the 100 most influential sports educators in America, recognized as "sports poet," by the Institute for International Sport.

Divided into four quarters, like a game itself, "Losing Season" traces a cycle of hope and disappointment as lived by the high school team.  From the "First Cut" to the "Last Game," the season unfolds with a forced confidence quickly tempered by resignation.

At the center of the drama is the coach himself, who in middle age struggles with the tension between his devotion to his job and his marriage and the widening gap between himself and his daughter.  The players themselves - be they Star or Scrub - harbor their own internal quarrels and dreams.  A small local coterie clings to the team's miserable season, from the equipment man and bus driver to the town's shop owners and the school's principal, each placing his own misguided optimism in the team's inevitable fate.

"'Losing Season' isn't just a great book of poetry, for it is much more than that," said Richard Jones.  "It is more like the Great American Novel we have long hoped would grace our literary landscape."

Ridl was a member of the Hope faculty from 1971 until retiring in 2006.  He has continued to stay involved in the life of the college, continuing to teach poetry for several semesters and leading one of the college's week-long Summer Seminars, "Creative Writing:  Poetry: Learning from Some Masters," in July.  In 2008, he previewed "Losing Season" during the college's "Winter Happening" event in January.

He is the author of several collections of poetry.  He has also published more than 300 poems in journals and has work included in numerous anthologies, and has read his work and led workshops at colleges, universities, art colonies and other venues around the country.

His collection "Broken Symmetry" was named one of the two best volumes of poetry published in 2006 by the Society of Midland Authors, and in 2001 his collection "Against Elegies" was chosen by U.S. Poet Laureate Billy Collins as the winner of the "Letterpress Chapbook Competition" sponsored by the Center for Book Arts of New York City.  Ridl's other volumes include "The Same Ghost," "Between," "After School," "Poems from 'The Same Ghost' and 'Between,'" and "Outside the Center Ring."

In addition to his volumes of poetry, Ridl is co-author, with Hope colleague Peter Schakel, of two textbooks, "Approaching Poetry: Perspectives and Responses" (1996) and "Approaching Literature in the 21st Century: Fiction, Poetry, and Drama" (2004). They also co-edited two anthologies.

In 1996, he was chosen Michigan's "Professor of the Year" by the Carnegie Foundation for the Advancement of Teaching. The college's graduating class presented him with the "Hope Outstanding Professor Educator" Award in 1976, and the student body elected him recipient of the "Favorite Faculty/Staff Member" Award in 2003. He was chosen by the graduating seniors to be the Commencement speaker in both 1975 and 1986.  The college's Visiting Writers Series, which he co-founded in 1982 with his wife Julie Garlinghouse Ridl, was named in his honor in 2006.

WestminsterCollege, from which he holds both his bachelor's and master's degrees, presented him with an "Alumni Citation Award" in September 2005.

"Losing Season" is available for $16, and is on sale at the college's Hope-Geneva Bookstore, located on the ground level of the DeWitt Center, 141 E. 12th St., as well as at other area booksellers and Amazon.

More information about Ridl and "Losing Season" may be found online at www.ridl.com.