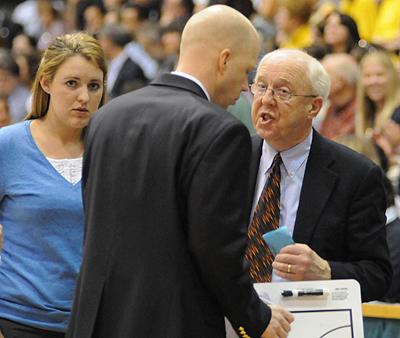 Excerpted from a Muskegon Chronicle article by Mike Mattson

Dean Morehouse is best known as a teacher, coach and insurance agent.

And now he's the author of a new book: Coaching at 70 Miles Per Hour and Trying to Stay in the Right Lane. (Henry Quill Press)

It started with Morehouse jotting down some ideas on the computer about the 2009 Hope women's season.

"I wasn't thinking about where it would go," Morehouse said. "I finished what appeared to be Chapter 2. I wrote another article and another article. (Friends) said maybe you have a book here. It was not intentional." The book highlights Morehouse's experiences and what he's learned in more than 45 years of coaching in junior high, high school and college athletics.

The book is dedicated to his parents, Howard and Fredreka Morehouse, and his eighth-grade basketball coach Vern Norris, who later became the executive director of the Michigan High School Athletic Association.

Morehouse identifies key aspects of coaching that he covers in seven chapters:

"Awards are hung on a wall and rewards are the relationships developed between players, parents, the custodians, and others," he said. "Rewards are far more important than awards."

Overall, Morehouse believes coaching involves so much more than Xs and Os. And he shares his successes and experiences in the book.

"I'm not trying to tell other coaches this is how you should do it," said Morehouse, who is an assistant for his son Brian at Hope. "There are a lot of neat rewards for coaches who keep things in perspective and have balance in their lives.

"I've come full circle. I have kids who played for me in 1965 traveling to watch our team play today.  It's not all about winning and losing."