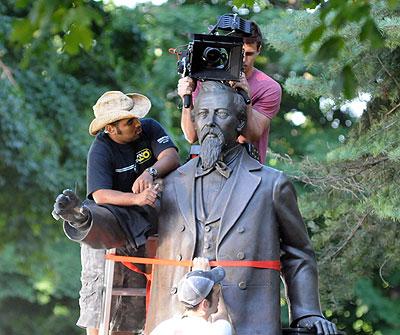 The Hope College campus during the final week in July has provided several of the backdrops for the shooting of an independent film, "Return to the Hiding Place."

The film tells the story of Dutch students who risked their lives to save Jews during World War II.   The title is a reference to the home of the ten Boom family who sheltered Jews from the Nazis during the war.  Corrie ten Boom, who wrote the book "The Hiding Place," is a character in the film, which stars John Rhys-Davies (whose scenes weren't in Holland) and is scheduled for completion in 2011.  The film is directed by Peter Spencer, who also wrote the screenplay inspired by his friendship in later years with one of the Dutch students.

The Hope campus, Holland community and several other locations in western Michigan are providing ideal backdrops for the shooting, which is also taking place in the Netherlands, Texas and Manistee.  Filming on campus has included the Pine Grove with the chapel, Graves Hall and Voorhees Hall among the locations.  Community sites have included CentennialPark, WindmillIsland and the FeltMansion in LaketownTownship southwest of town.

Holland and Hope were chosen due to the involvement of 1997 Hope graduate Matt Tailford, who is president of Manistee-based 10 West Studios, which is co-producing the film.  From his student days he remembered the community and campus as well-suited to standing in for Dutch locations.

"Knowing what Hope and Holland offered from a Dutch architectural standpoint, it was really my starting point," he said.  "It was a great opportunity to bring Hope into the mix."

In addition to featuring campus locations, the film will include members of the Hope community, with students and recent graduates among those who answered the call for extras.

For chemistry major and pre-medical student Rebekah Taylor, a junior from Zeeland who had been working on campus, the film provided a once-in-a-lifetime way to wrap up the summer.

"I had finished working this summer at Upward Bound as an office assistant," she said.  "It seemed like something interesting to do."

Jackie Richards of Worthington, Ohio, and 2010 graduate Alex Martin of Fort Wayne, Ind., both signed on as a way of gaining career-related experience.  Both have been working with Hope Summer Repertory Theatre (HSRT) and are hoping to pursue careers in theatre.

"This has been my first experience working with a film," Martin said.  "I've learned a lot,"

"It's incredibly beneficial for our careers to have these experiences and opportunities," he said.

Richards, who had worked as an extra before, noted that she has enjoyed seeing how many people are involved in creating a film and also the process itself, with multiple takes behind getting each moment just right.  "We'll do the same thing, only it'll be from a different angle throughout," she said.

She's appreciated the work as a complement to her time with HSRT, which itself brings gathers theatre professionals from around the world and provides a living learning experience for the students who work with the program.  "It's a really great group that gets together - very talented," she said.

Grateful for the college's accommodation as host, Tailford has valued the chance for students to get involved.

"It was my hope that it could be that kind of reciprocal relationship," he said.

"We definitely want to present those kinds of opportunities," Tailford said.  "To be able to come back and offer students that kind of thing is pretty cool."

The film has a Facebook page that includes a plot summary and photographs
http://www.facebook.com/pages/Return-to-the-Hiding-Place/341262263480