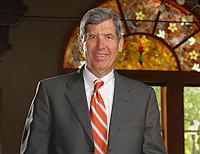 Several new members have been elected to the Hope College Board of Trustees.

The board has also re-elected Dr. Kenneth G. Elzinga of Charlottesville, Va., and Theodore S. Etheridge III of West Olive to four-year terms.

Clark is president and chief executive officer of National Heritage Academies.  He and his wife, Kim, are both 1994 Hope graduates, and have been active in the life of the college in a variety of ways since graduation.  They have four children at home.

° Dean Overman is retired from serving as a senior partner with Winston & Strawn, and was partner-in-charge of the firm's Washington, D.C., office for many years.  He is currently chairman of The Arbella Company Ltd.  His active involvement in the life of the college has included presenting seminars for students participating in Hope's Washington Honors Semester, in addition to presenting the Commencement address in 1978 and the Opening Convocation address in 2003.  A 1965 Hope graduate, he received a Distinguished Alumni Award from Hope in May.

° Douglas Ruch, a 1981 Hope graduate, is president and chief executive officer of the Fleetwood Group Inc. of Holland.  He chaired the college's business and industry community campaign during 2008-09.  He and his wife, Linda, have three sons:  Dustin and Mitch, who graduated from Hope in 2007 and 2010 respectively, and Bryant, who will be a freshman at Hope this fall.

° Beth Snyder has worked for Exxon Mobil for nearly nine years, and in April became program officer for the corporation's U.S. educational and environmental contributions programs, for which she will relocate to Dallas, Texas, in September.  A 1994 Hope graduate, she is a past member of the college's Alumni Association Board of Directors, of which she was president in 2005 and 2006.

° Dr. Joanne Stewart is a professor of chemistry at Hope, where she has taught since 1988. Her professional interests are in the scholarship of teaching and learning and in using emerging web technologies to build an international community of inorganic chemistry scholars. She is the director of Hope's Howard Hughes Medical Institute program, a 1.4 million dollar program that supports research, teaching, and outreach in the sciences.

° Rev. Jill Ver Steeg is a teaching pastor at Meredith Drive Reformed Church in Des Moines, Iowa.  She holds her Master of Divinity degree from Western Theological Seminary, and was a chaplain at Hope from 2000 to 2003.  Her husband, the Rev. Shane Ver Steeg, LISW, is a 1998 Hope graduate.