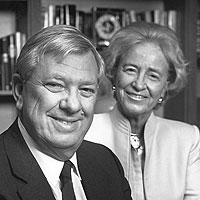 Peter C. Cook, a member of the Hope College Board of Trustees over four decades and a generous philanthropist to many organizations in Western Michigan, including Hope College, died on Sunday, Nov. 28, 2010, at age 96.

He and his wife, Emajean (Pat), who died on May 20, 2008, were involved in the life of the college in many ways.  Their support had included establishing the Peter and Emajean Cook Scholarship Fund and the Peter C. and Emajean Cook Endowed Professorship.  Cook Residence Hall and Cook Auditorium in the De Pree Art Center, for which they provided leadership gifts, are named in honor of them.  Peter was a member of the Board of Trustees from 1977 to 1989, when he became an honorary trustee, and was a national co-chair of the college's successful Legacies: A Vision of Hope fund-raising campaign that concluded in 2005.  He received an honorary degree, a Litt.D., from Hope in 1981.

He was born and raised in Grand Rapids, and attended Davenport University.  He and Pat, who met and began dating while high school students, were married in 1940.  They were lifelong members of Grace Reformed Church in Grand Rapids.

His early career included working in construction with his father; in a variety of positions with Kelvinator; as an accountant at Blackmer Pump Co.; and as chief accountant and treasurer at Ranger Reel.

He was president of Import Motors Limited from 1954 until selling the business in 1980.  In 1977, he established Transnational Motors, which sold Mazdas as Mazda Great Lakes, with business partners Robert Hooker and Max Boersma '46, serving as chairman and majority owner until selling the company in 2000.  He was most recently chairman of Cook Holdings.

He and Pat established the Cook Charitable Foundation as a conduit for their benevolence.  They generously supported numerous organizations and charities in addition to Hope, including Aquinas College, Calvin College, Davenport University, Grand Rapids Community College, Grand Valley State University, Lake Michigan Academy, Porter Hills Presbyterian Village and Spectrum Health, and also contributed extensively to the Southwest Grand Rapids neighborhood where they had grown up.  He served on several boards, including of the Blodgett-Butterworth Foundation, the Porter Hills Foundation, Gospel Communications and the Van Andel Institute.