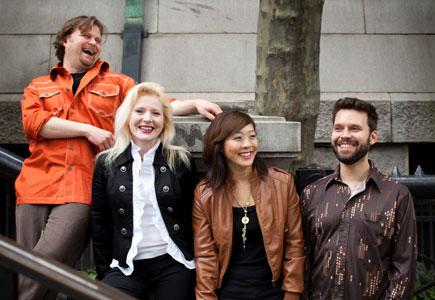 The Hope College Great Performance Series will present ETHEL featuring Robert Mirabal in “Music of the Sun” on Friday, Jan. 27, at 7:30 p.m. in Dimnent Memorial Chapel.

Acclaimed as one of America’s leading postclassical string quartet, ETHEL seeks to boldly infuse contemporary concert music with fierce intensity, questioning the boundaries between performer and audience, tradition and technology.

Three-time Grammy Award-winning Native American flutist Robert Mirabal is joining ETHEL to create a cross-cultural contemporary music event. The evening will highlight instruments of the string quartet, and Native American flutes and drums. “Music of the Sun” is a program inspired by Native American sun traditions, in which each day begins with “running to the sun”—a fusion of spiritual and physical discipline.

The collaboration grew out of the ETHEL/Mirabal work as part of ETHEL’s “TruckStop” project, which premiered at the Brooklyn Academy of Music in 2008.

Tickets are $18 for regular admission, $13 for senior citizens, and $6 for children 18 and under, and are available online at https://tickets.hope.edu/ticketing and at the ticket office in the main lobby of the DeVos Fieldhouse. The ticket office is open weekdays from 10 a.m. to 5 p.m. and can be called at (616) 395-7890.

More information about the season may be obtained online by visiting www.hope.edu/gps.