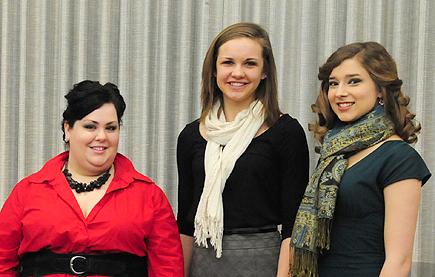 Three Hope College students are among the cast of Opera Grand Rapids’ forthcoming production of Mozart’s “The Magic Flute.”

Freshman Katrina Baker, senior Heather Benson and senior Jenna Buck all have roles in the production, which is taking place on Friday and Saturday, Feb. 3 and 4, at 7:30 p.m. at DeVos Performance Hall in Grand Rapids.

A fantasy set in ancient Egypt, the opera centers on Tamino as he seeks to rescue and prove himself worthy of the hand of Pamina, who is said to be held captive by a wicked sorcerer.  Tamino is provided with a golden flute whose powers aid him in the effort.

As part of their preparation for the production, the three students have been rehearsing with mentorship by Linda LeFever Dykstra, who is an associate professor of music and chair of the voice division at Hope.  They are among her voice students at the college.

Additional information about the production, the availability of tickets and Opera Grand Rapids is available online at www.operagr.com.