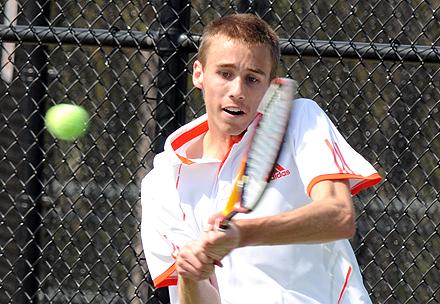 Senior Bobby Cawood, pictured, of East Lansing (East Lansing HS), in addition to being named to the men's All-MIAA first team, has been presented the league's Allen B. Stowe Award for outstanding sportsmanship. Over the past 20 years under coach Steve Gorno, this award has gone to a Hope player 12 times, including 11 of the last 16 years.

Freshman Carli Capestany of Hudsonville (Hudsonville HS) has been named to the All-MIAA women's team. She is the only first-year player to receive first team recognition.

The Flying Dutch, coached by Nate Price, were MIAA women's champions and will compete in the NCAA Division III championships. The Flying Dutchmen finished third in the men's standings.