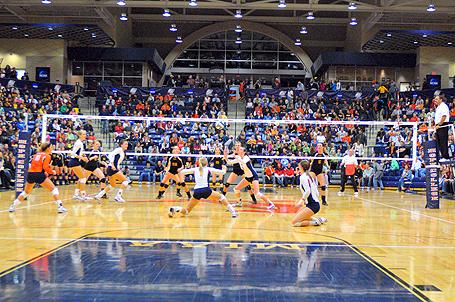 The exciting Hope/Calvin volleyball rivalry of recent years will
continue in the upcoming season if the pollsters are correct.

The Calvin Knights and Hope Flying Dutch have been tabbed to finish
one-two in the Michigan Intercollegiate Athletic Association (MIAA)
race and both teams are included in the top ten of the American
Volleyball Coaches Association national pre-season NCAA Division III
poll -- Calvin at #3 and Hope at #8.

A year ago Calvin and Hope were one-two in the MIAA standings and each
advanced to the NCAA championships where the Knights eliminated the
Flying Dutch from competition. Calvin ended the season with a 33-1
record while Hope was 25-7.

This season Hope and Calvin have an added incentive to gain the NCAA
championships as Hope will host the national finals at DeVos
Fieldhouse on Nov. 15-17.