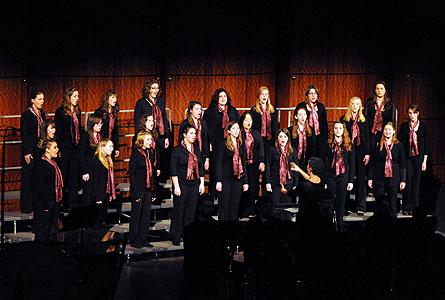 Hope College students take the stage for this fast-paced, musical spectacular, during which audience members hear everything from opera to jazz. The hardest part for those seeing the show is containing their enthusiasm, at least at first. In the tradition of the quick-moving musical event, audience members are asked to hold their applause until intermission and the end of the performance.

The concert unveils the gifts of all Hope College’s major musical groups, along with soloists, chamber groups, and small ensembles.

An organ solo will include Jacque-Nicholas Lemmens arrangement of “Fanfare,” performed by freshman Aaron Goodyke of Zeeland.

A flute duo, sophomore Marie Schrampfer of Appleton, Wis., and senior Faith DeVries of Stillman Valley, Ill., will be performing G. Schrocker’s “Coffee Nerves” with the accompaniment of Jennifer Wolfe on piano.

To conclude the program, the Hope College Orchestra will be performing Ludwig van Beethoven’s “Egmont Overture,” conducted by Richard Piippo.

Tickets for Musical Showcase are $10 each, and may be ordered through at the Hope College Ticket Office located in the main lobby of the DeVos Fieldhouse at 222 Fairbanks Ave. The ticket office is open weekdays from 10 a.m. to 5 p.m., and may be called at (616) 395-7890. Tickets can also be purchased online through Hope’s ticket office at tickets.hope.edu/ticketing/

In addition, tickets may be ordered by phone through Ticketmaster by calling (616) 456-3333 or visiting www.ticketmaster.com. A service fee is added to the cost of each ticket purchased this way.