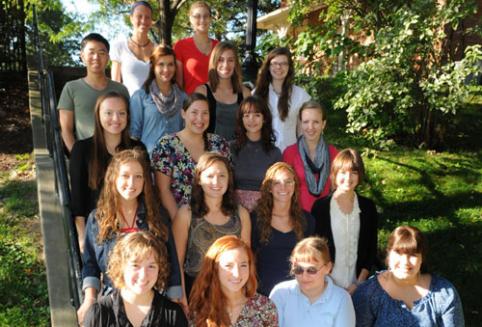 The program, which began in 2010 with support through a previous award from the foundation, engages students in developing research projects in areas of scholarly interest in the arts and humanities with faculty mentors, with a particular emphasis on teaching them how to use new and emerging digital technologies in pursuing and sharing their work.  The new, $500,000 grant will help the program establish more opportunities through partnerships with research universities and consortia, internships through The Philadelphia Center off-campus study program that Hope manages, and expanded support for student research projects and training for faculty interested in serving as mentors.

All of the experiences are designed to prepare the students for success, whatever path they take after graduation, according to the program’s director, Dr. William Pannapacker of the Hope English faculty.

“We want to cultivate arts and humanities majors who can engage the community and take their interests and values into graduate school and the contemporary workplace, including entrepreneurship,” Pannapacker said.

The approach, he noted, builds on the college’s long-standing—and highly regarded--tradition of teaching through involvement in original research, particularly in the natural and applied sciences and social sciences.  It is a method, he said, that serves equally well in the arts and humanities, especially when enriched by new tools that have already had a major impact on how scholars in such disciplines do their work.

“Hope has a long history as a nationally recognized leader for involving students in collaborative faculty-student research, a highly effective model that we’re bringing to the arts and humanities,” he said.  “While the Mellon Scholars Program is grounded in the traditional methods of the liberal arts—reading, writing, thinking, speaking—one of its most distinctive features is building on that foundation with the scholarly tools of the 21st century: social networking, collaboration, interactive scholarly interfaces, and new media technologies that are often described, collectively, as the ‘digital humanities.’”

Pannapacker anticipates that the program expansion can ultimately yield broader benefits as well.  For example, the program is currently developing a partnership with Matrix: The Center for Digital Humanities and Social Sciences at Michigan State University and he anticipates connecting as well with other colleges that, like Hope, are members of the Great Lakes Colleges Association.  As one possibility, he envisions the exploration of local history, which is an ongoing focus of student research at Hope, becoming replicated at other institutions and made available collectively through a larger network.

“It could begin to add up to a national project on local and regional history that hasn’t been attempted since the state-by-state American Guide Series produced by the Works Progress Administration in the 1930s,” he said.

In the same way, he hopes that students interning in Philadelphia, which is a semester-long program, may be able to help institutions in the historic city with print archives digitize their materials and thus make them available not only on-site but to researchers around the world.

Students normally join the three-year Mellon Scholars Program at the beginning of their sophomore year.  Although students should have at least one major in the arts or humanities, the program takes an interdisciplinary approach and participants have also pursued majors in the social sciences or natural applied sciences.

The program includes specialized coursework as well as involvement in research experiences leading to a capstone senior project.  A total of 47 students, chosen competitively based on faculty recommendations, are currently enrolled, the maximum the program can accommodate.

The first cohort of five Mellon Scholars graduated this past May.  Among other honors, two of the initial graduates had had their research projects chosen for presentation during the national “Posters on the Hill” event held in Washington, D.C., and another received a highly competitive award through the Fulbright U.S. Student Program sponsored by the U.S. Department of State.

A total of 65 faculty representing 19 departments serve as research mentors in the program.  Dr. Julia Randel, associate professor of music, is expanding her involvement this year in a new role as associate director following service as a research mentor and this past spring as interim director while Pannapacker was on sabbatical leave.

Based in New York, The Andrew W. Mellon Foundation makes grants in five core program areas:  higher education and scholarship; scholarly communications and information technology; art history, conservation and museums; performing arts; and conservation and the environment.  The foundation’s grant-making philosophy is to build, strengthen and sustain institutions and their core capacities.