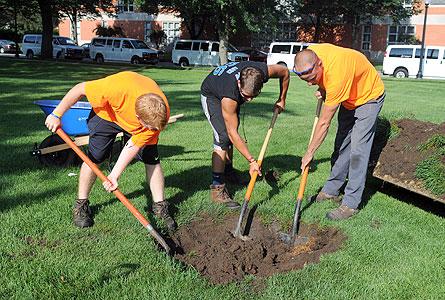 Two years ago tornado-force winds swept across Holland and thru the Hope campus uprooting many trees.

New trees were planted this week by the Hope College grounds crew.

One, an American (Princeton) Elm (pictured left) had a very special meaning because it was planted in honor of retiring President Jim Bultman and his wife Martie. The tree was planted at the exact location near Voorhees Hall where an American Elm believed to be older than Hope College itself (160 years old) was toppled on July 11, 2011. Dr. Bultman will retire as Hope's 11th president on June 30th.