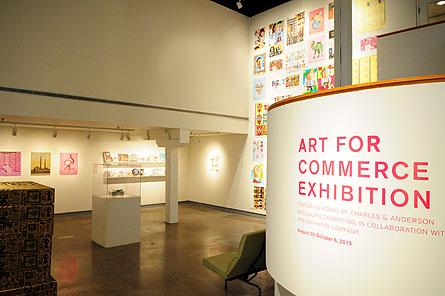 The gallery of the De Pree Art Center at Hope College is featuring the exhibition “Art for Commerce,” through Sunday, Oct. 6.

The exhibition features work by Charles S. Anderson and Laurie DeMartino in collaboration with French Paper Company.  “Art for Commerce” portrays graphic design as a viable art form beyond its origins in marketing and communications.

There will also be an “Artist’s Talk” with Charles S. Anderson on Friday, Sept. 6, at 6 pm, in the DeWitt Center main theatre.  Admission to the talk is $15 for the general public, $10 for members of the college’s faculty and staff, and free to Hope students with ID.

An opening reception for the exhibition will follow the talk, and will take place on Friday, Sept. 6, from 7 p.m. to 9 p.m. in the gallery.  The opening reception and exhibit itself are free and open to the public.

In 1989, Charles S. Anderson Design was founded with a single client—The French Paper Company in Niles, Mich.  While the firm has worked with many clients since, their partnership with French Paper has endured as one of the longest-running, most prolific and internationally recognized client/designer relationships in the history of graphic design.

Coupled with the world-renowned design of Laurie DeMartino, this exhibition pays tribute to this long-standing collaboration between French Paper and the artistry that covers its promotional pieces.

The exhibit is the opening foray into the gallery’s annual series, “Breaking Artistic Boundaries,” which during the 2013-14 season is featuring the theme “Disegno.” Rooted in 16th-century Italian Renaissance theory, the term “disegno” (or “design”) refers to the creative idea in the mind of the artist—an idea often embodied in the preliminary drawing.  The goal of this year’s theme is to explore the principle of “disegno” through a contemporary, 21st-century lens.

CSA Design has been awarded top honors in every major design competition, including multiple gold pencils from The One Show, and multiple gold and silver awards from the New York Art Directors Club.

Tickets for the artist’s talk are available at the ticket offices in the main lobby of the DeVos Fieldhouse (222 Fairbanks Ave.) and the Events and Conferences Office located downtown in the Anderson-Werkman Financial Center (100 E. Eighth St.).  Both offices are open weekdays from 10 a.m. to 5 p.m. and can be called at (616) 395-7890.  No tickets are required for either the opening reception or the exhibition.

The De Pree Art Center and DeWitt center are both located facing Columbia Avenue at the former 12th Street and are handicapped accessible.  Following the opening, the gallery will be open Mondays through Fridays from 10 a.m. to 5 p.m., and Saturdays and Sundays from 1 p.m. to 5 p.m.