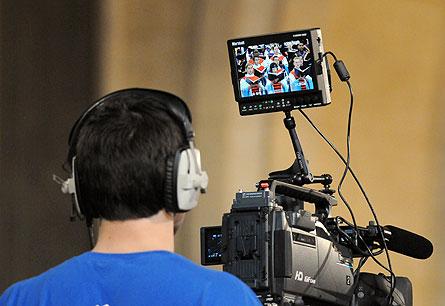 Tradition and technology will blend at today's inauguration of Dr. John C. Knapp as the 12th president of Hope College.

Tradition and technology will blend at today's inauguration of Dr. John C. Knapp as the 12th president of Hope College.

Reflecting the online age, the ceremony, which begins at 2 p.m. ET, will be live-streamed for viewing to anyone around the world who has a device capable of connecting to the Internet. Link to Live Stream

In keeping with tradition, the event itself will take place in Dimnent Memorial Chapel, which began hosting Hope’s inaugurations when sixth president Wynand Wichers took office in 1931 (completed in 1929, the site wasn’t an option for Wichers’s five predecessors).

The live streaming (hope.edu/live) will accommodate local as well as distant viewers.  With seating in Dimnent limited to about 1,100, tickets are required for admission and have already been distributed.  Accordingly, in addition to being available individually, the live-streaming will also be shared on the large screen in Winants Auditorium of Graves Hall next door.

Winants has provided overflow seating and a live feed before, but the location is also appropriate on another level.  Winants, which served as the college’s chapel from 1894 until Dimnent was completed, also once hosted an inauguration itself, that of third president Gerrit J. Kollen in 1894.

In addition to the formal investiture ceremony, the event will feature the inaugural address, “The Promise of Hope,” delivered by Knapp.

Participants in the occasion will include multiple members of the Hope community, including two former Hope presidents, who will present the litany of dedication:  Dr. Gordon J. Van Wylen, who was the college’s ninth president from 1972 until retiring in 1987; and Dr. James E. Bultman, who was the 11th president of Hope from 1999 until retiring on June 30 of this year.   The event’s musical selections will include a work for choir and organ composed by 1975 Hope graduate Alfred V. Fedak, who is minister of music and arts at Westminster Presbyterian Church in Albany, N.Y., “The Lord is My Shepherd (For Us the Living).”

In addition to members of the Hope community—students, faculty and staff, alumni, members of the Board of Trustees and other friends of the college—those attending will include representatives of more than 40 institutions of higher education and professional and learned societies from across the United States as well as England, India, Japan and Mexico.

A variety of events have been scheduled in conjunction with the inauguration, which is taking place as part of the college’s Homecoming Weekend.

Earlier in the day, also in Dimnent Memorial Chapel, the college’s weekday Chapel service at 10:30 a.m. will feature remarks by Van Wylen.  The public is invited to the morning service and admission is free, although attendance at the event is often at or near capacity.

Following the inaugural ceremony, from 4 p.m. to 5 p.m. on Friday, Oct. 4, the Presidents’ Room in Graves Hall will be available for tours.  The room features painted portraits of each of the college’s first 11 presidents as well as of the Rev. Albertus C. Van Raalte, who co-founded the college with Hope’s first president, the Rev. Philip Phelps, and also served as the first chairperson of the college’s Board of Trustees.  The public is invited, and admission is free.

A post-inauguration reception will take place on Friday, Oct. 4, from 5 p.m. to 6:30 p.m. at the Haworth Inn and Conference Center.  The public is invited, and admission is free.

President Knapp and his wife, Kelly, will host a picnic in the college’s Pine Grove on Saturday, Oct. 5, from noon to 2 p.m.  Titled “A Taste of the South: A celebration of Southern cuisine” and geared especially to alumni and students but open to others, the family-oriented event will include live music, giveaways and a variety of activities as well as displays by student organizations.  Tickets are $10 for regular admission, $5 for children ages three to 10, and free for children two and under, and are available at the ticket offices in the Events and Conferences Office in the Anderson-Werkman Financial Center in downtown Holland or in the main lobby of the DeVos Fieldhouse.  Both offices are open weekdays from 10 a.m. to 5 p.m. and can be called at (616) 395-7890.

John C. Knapp became Hope’s 12th president on July 1.  His leadership experience includes higher education and business, and his scholarship includes multiple books and articles on leadership ethics, issues in higher education, and the intersection of faith and work.  Immediately prior to coming to Hope, he had served since 2008 at Samford University in Birmingham, Ala., where he was founding director of the Frances Marlin Mann Center for Ethics and Leadership and the University Professor and Mann Family Professor of Ethics and Leadership.