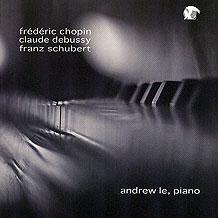 Selection as a Steinway Artist and the release of his first compact disc have provided two major highlights for Dr. Andrew Le of the Hope College music faculty in recent weeks.

Recognition as a Steinway Artist places Le among only 1,600 pianists worldwide.  Musicians with the designation are highlighted on the company’s website and in turn have selected Steinway as their piano of choice.  The list of Steinway Artists includes musicians from every genre from classical pianists like Lang Lang, to jazz stars like Diana Krall, to pop icons like Billy Joel, to “immortals” like Irving Berlin, Cole Porter, Sergei Rachmaninoff and Arthur Rubinstein.

“I applied for recognition many, many months ago, and honestly forgot about it.  I knew it was pretty competitive,” said Le, an associate professor of music and head of keyboard studies at Hope, and has taught at the college since 2005.  “Then one day this summer, I received a letter welcoming me to the roster along with a wall plaque and a link to my new page on Steinway’s website.  It was very humbling to see my name among the names of other amazing artists of our day.”

The CD, produced by Blue Griffin Recording Inc. of Lansing, features his three “all-time-favorite” works.  It opens with the “Polonaise-Fantasy, Op. 61,” by Chopin; continues with “Images, Book 2,” by Debussy; and concludes with the “Sonata in B-flat Major, D. 960,” by Schubert.

The liner notes included with the CD reflect Le’s enthusiasm for the three composers.  He describes the “Polonaise-Fantasy” as one of Chopin’s “crowning achievements”; considers the church bells, poetry and fish that inspired the three movements of Debussy’s work; and reflects on the “masterful balance” in tonality that gives Schubert’s sonata “a vast emotional scope.”

The cover design incorporates another of Le’s interests.  An avid photographer, he shot the cover illustration himself.  The black-and-white image focused on a piano keyboard is itself a tribute to Debussy, inspired by another of the composer’s works, “In Black and White.”

Le is the First-Prize Winner of the 2004 Hilton Head International Piano Competition. Described as “an impressive tour-de-force” by critic Harris Goldsmith of the “New York Concert Review,” he is known for his exciting, engaging, and artistically sensitive performances. His wide-ranging repertoire spans centuries of music, and he has performed as a solo recitalist, as a chamber musician, and as soloist with orchestras at halls and music festivals throughout the United States and abroad.

Le began teaching professionally at a young age when he was invited to serve on the faculty of the All-State Program at Interlochen Arts Camp as an undergraduate student, teaching alongside tenured professors.  He went on to serve on the faculties of the Juilliard School Piano Minor Program, Gilmore Foundation Piano Camp, and Friends Music Camp.  He was also appointed Jerome Lowenthal’s teaching assistant at Juilliard in 2003.

He performs frequently with his wife, violinist Jennifer Walvoord. Together, they are the artistic directors of the Chamber Music Festival of Saugatuck. They are known for their energetic and dynamically engaging performances, and are loved by audiences everywhere, particularly for their fresh and witty commentary about the music they present. Their charismatic stage chemistry has taken them to venues all across the nation.

Le is also the founder and director of the Brown Bag Series at the Holland Area Arts Council, an informal concert series designed to encourage and foster the accessibility of classical music to the public. Passionate about serving his local community, he has also performed recitals as food drives, the last of which brought in close to 600 non-perishable items that were donated to the Holland Rescue Mission.

As a violinist, he is a member of the Holland Symphony Orchestra.

As a photographer, Le captures portraits, weddings, landscapes, concerts, and other events. He particularly enjoys offering free photographic services to benefit non-profit organizations in the local Holland area. Le has also been a contributing photographer for Getty Images’ stock collection.

Copies of the compact disc are available for $21.99 at the college’s Hope-Geneva Bookstore, which is located on the ground level of the DeWitt Center, 141 E. 12th St., and can be called at 800-946-4673 or (616) 395-7833.  Prospective students considering the piano program at Hope can receive a copy of the CD free of charge by contacting Le for more information at lea@hope.edu.