Professor Edits “The Woman in Latin American and Spanish Literature” 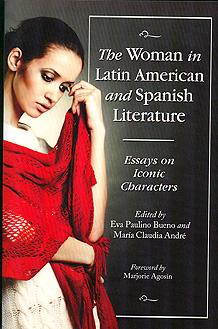 Maria Claudia André of the Hope College Spanish faculty has co-edited the book “The Woman in Latin American and Spanish Literature.”

André, who is a professor of Spanish and chairperson of the department of modern and classical languages at Hope, co-edited the volume with Eva Paulino Bueno of St. Mary’s University of San Antonio, Texas.  It has been published by McFarland and Company Inc. of Jefferson, N.C., and London, England.

The book features essays by noted scholars of Latin American and Spanish literature exploring the literary history of Latin America through the representation of iconic female characters.  Focusing both on canonical novels and on works virtually unknown outside their original countries, the essays discuss the important ways in which the characters represent nature, history, race and gender, the effects of globalization, and the unknowable “other.” They examine how both male and female writers portray Latin American women, reinterpreting the dynamics between the genders across boundaries and historical periods.

“Choice: Current Reviews for Academic Libraries” praised the book as “highly recommended,” noting, “As a whole, this beautifully edited volume is a strong contribution to the field.”

A member of the Hope faculty since 1994, André specializes in Hispanic American literature and Latin American studies in her teaching at the college.  She has presented papers at national and international conferences and published articles in several literary journals.

André holds a bachelor’s degree in translation and interpretation from the Universidad del Salvador (Buenos Aires, Argentina) and a doctorate in Latin American and Spanish literature from the State University of New York at Albany.