Hope Recognized as a Top Producer of U.S. Fulbright Students 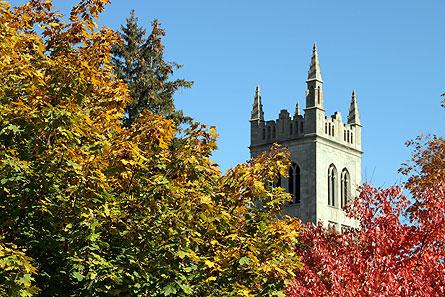 Hope College has been recognized as a “U.S. Student Top Producer,” and is first in Michigan among bachelor’s institutions, for the number of students to receive Fulbright awards for 2013-14.

The U.S. Department of State recently announced the complete list of colleges and universities that produced the most 2013-14 Fulbright U.S. Students.  The Fulbright Program is the U.S. government’s flagship international educational exchange program.  The success of the top-producing institutions is highlighted in the Monday, Oct. 28, edition of “The Chronicle of Higher Education.”

“Hope College has been producing more and more strong applicants for the Fulbright program over the past few years,” said Dr. David Cunningham, who is director of the college’s CrossRoads Project and Center for Writing and Research as well as a professor of religion.  He and Dr. Janis Gibbs, associate professor of history, mentor Hope’s student Fulbright applicants.  “We work very closely with those students who are willing to invest serious time and energy in the application process.  That investment seems to be paying good dividends.”

The four Hope students who received awards were Tessa Angell of Grand Rapids, Rachel Elzinga of Doylestown, Pa., Andreana Rosnik of Shelby Township and Erin Wilhelmi of Cary, Ill.  Each graduated in May.

Angell is an English-language teaching assistant at a secondary school in the Cantabria region of Spain.  Elzinga is an English language teaching assistant at a rural school in Nepal and is also working with the Nepal English Language Teachers’ Association (NELTA) to contribute to the development of English curriculum and teacher training.  Rosnik is at the University of Barcelona in Spain conducting theoretical chemistry research related to understanding quantum coherence effects in photosynthetic light-harvesting.  Wilhelmi will be serving in a province in Argentina in 2014, in conjunction with the nation’s March-November school year, as a teacher assistant in an English teacher training college.

Since its inception in 1946, the Fulbright Program has provided more than 325,000 participants—chosen for their academic merit and leadership potential — with the opportunity to study, teach and conduct research, exchange ideas and contribute to finding solutions to shared international concerns.  In the past 67 years, more than 44,000 students from the United States have benefited from the Fulbright experience.  More than 1,800 U.S. students, artists and young professionals in more than 100 different fields of study were offered Fulbright Program grants to study, teach English, and conduct research in more than 140 countries throughout the world beginning this fall.

In the United States, the Institute of International Education administers and coordinates the activities relevant to the U.S. Student Program on behalf of the U.S. Department of State, including conducting an annual competition for the scholarships.

The Fulbright Program also awards grants to U.S. teachers and faculty to conduct research and teach overseas.  Katherine Sullivan, associate professor of art at Hope, currently holds one of the awards, and is spending the 2013-14 school year in India.  Several other members of the Hope faculty have also received Fulbright awards through the years, among them Gibbs, who held a Fulbright-Hays Doctoral Research Abroad Fellowship during 1991-92, spending the year in Cologne, Germany, conducting research for her dissertation.

In addition, some 4,000 new foreign Fulbright students and scholars come to the United States annually to study for graduate degrees, conduct research and teach at U.S. universities, colleges and secondary schools.

More information is available at us.fulbrightonline.org