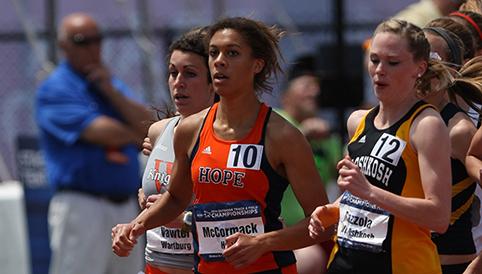 Hope College’s Sheri McCormack has been chosen to the 2013-14 Capital One Academic All-America® Division III Men’s and Women’s Track and Field/Cross Country Teams, as selected by the College Sports Information Directors of America (CoSIDA).

The recent graduate from Holland, Michigan (West Ottawa HS), is one of 15 female athletes on the First Team and 45 honored total on either the First, Second or Third Teams.

McCormack has been accepted to the University of Michigan’s Dental School. She held a 3.91 GPA at Hope while pursuing a major in Spanish and a minor in chemistry.

“She knows what she wants on the track, in the classroom and out of life,” Cole said. “She does what needs to do to get those things done. I’ve had her as an athlete and in one of my classes. She stands out above most everybody else.”

In May, McCormack finished sixth in the nation in the 1,500 meters at the Division III Outdoor Track & Field Championships. She became Hope's first All-American in the event.