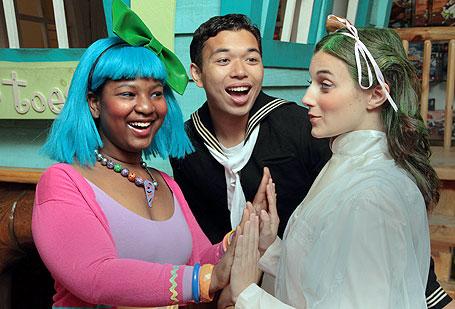 The Hope Summer Repertory Theatre’s Children’s Performance Troupe is presenting the Midwestern premiere of “The Doll People,” a musical adaptation of the best-selling children’s book written by Ann M. Martin, author of the beloved Babysitter’s Club.

Children of all ages are invited to bring their favorite dolls to the show, where they can join the actors on stage for a doll parade at the start of each performance.  Everyone who participates in the parade will receive a special gift.

“The Doll People,” in the words of Beecham, is the “great story of a girl finding someone completely different from herself.” When Annabelle meets Tiffany Funcraft, a “playmobile, Betty-spaghetti kind of doll,” her safe Victorian world is “blown wide open.”  Although they are so different, the two girls become fast friends and up to look for Annabelle’s Auntie Sarah, who has been missing for 45 years.   “At first they’re the clash of two worlds,” Jahnna said, “but they work together and they help each other, save each other and protect each other.  On the surface they’re completely different, but they find the similarities, and that’s what friendship is about.”

Playing the role of Annabelle Doll is Taylor Harvey, an intern working toward a B.F.A. in the University of Minnesota/Guthrie Theatre BFA Actor Training Program.  In the role of Bobby Doll is fellow acting intern Aaron Alcaraz, currently studying musical theatre at Ithaca College in New York.  Joining them in the role of Tiffany Funcraft is Olivia Donalson, also an acting intern from Ithaca College.

Beecham is returning to HSRT for her 10th season, having previously played the role of Mrs. Bennett in “Pride and Prejudice” in the 2012 season and directed the musical “Chaps!” with her husband, Malcolm, in 1995.  Together, she and Malcolm have written several other musicals, including “They Came From Way Out There,” “Holmes and Watson Save the Empire”, “Dogpark the Musical,” and “Chaps! A Jingle Jangle Christmas.”  The couple has also written more than 130 books for young adults and children, including “The Jewel Kingdom,” “Bad News Ballet” and “Love Letters.”  In addition, Jahnna has also directed video and audio for Scholastic Productions, Hooked on Phonics, and other companies, as well as directed productions at the Milwaukee Repertory Theatre, Cleveland Playhouse, San Jose Stage Company, Artists Repertory Theatre in Portland, Oregon, and the Repertory Theatre of St. Louis.

Individual tickets are now on sale at the DeWitt Ticket Office (141 E. 12th St), which is open Mondays through Fridays from 10 a.m. to 5 p.m. and Saturdays from noon until intermission.  The college’s downtown ticket office, located at 100 E. 8th Street, is also open Monday through Friday from 10 a.m. until 5 p.m.  All tickets are $15 for General Seating. Patrons can also purchase individual tickets online by visiting hope.edu/hsrt or calling (616) 395-7890.