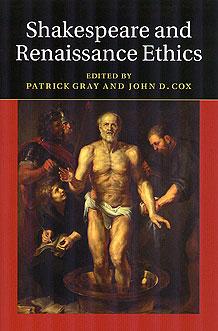 Dr. John Cox of the Hope College English faculty has co-edited “Shakespeare and Renaissance Ethics,” a collection of essays by various scholars that consider William Shakespeare’s active role in the intellectual life of his day.

Cox co-edited the volume, which has been published by Cambridge University Press, with Patrick Gray of Durham University in England. When Gray was a graduate student at Yale University in 2010, he organized a conference with the same title as the book. He invited Cox to deliver a plenary lecture on “Shakespeare and Christian Ethics.” After the conference, Gray asked Cox to join him in co-editing a collection of essays on the conference theme.

In a 30-page introduction, the editors make the point that Shakespeare was not a passive receiver of ideas but an active participant in the intellectual life of Renaissance England. Though he voiced his opinions only in his poetry and in the dialogue of his plays, Cox and Gray note that a great deal can be inferred from what he wrote. The essays focus on Shakespeare as a thinker about ethics in particular. The three-part division of the book reflects the major strands of influence on ethical thinking during Shakespeare’s lifetime.

Cox, who is the DuMez Professor of English, has taught at Hope College for 33 years. He has published many books and scholarly articles, most recently the centennial history of Maple Avenue Ministries in Holland.  “Shakespeare and Renaissance Ethics” is his second book with Cambridge University Press. The first one, called “The Devil and the Sacred in English Drama, 1350-1642,” was published in 2000.

In April 2010, Cox, who is also a past-president of the Conference on Christianity and Literature, was one of three Shakespeare scholars interviewed by National Public Radio for the half-hour program “Shakespeare’s Bible.”  Locally, in 2012 he presented the seminar “Shakespeare’s Prayers” during the college’s annual Winter Happening event and delivered the lecture “Shakespeare and the Bible” in conjunction with Hope’s presentation of the national traveling exhibition “Manifold Greatness: The Creation and Afterlife of the King James Bible.”