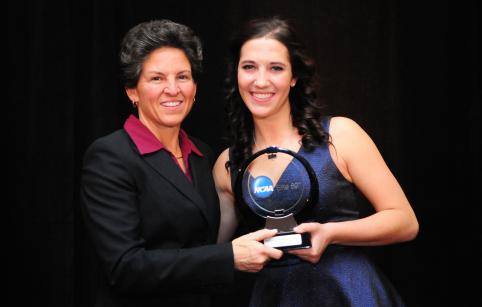 Hope College volleyball player Jayne Kessel has been awarded her second Elite 89 award from the NCAA.

The Elite 89, an award founded by the NCAA, recognizes the true essence of the student-athlete by honoring the individual who has reached the pinnacle of competition at the national championship level in his or her sport, while also achieving the highest academic standard among his or her peers.

The Elite 89 is presented to the student-athlete with the highest cumulative grade-point average
participating at the finals site for each of the NCAA's 89 championships. All GPAs are based on a straight grading scale to ensure consistency among institutions.

“It is such an honor and a blessing,” Kessel said. “I think that really reflects what Hope College is and what our athletic program is. I like the emphasis on the student athlete. That’s why I love playing a Division III sport.”

Kessel carries a 4.0 grade point average while pursuing her interest in a pre-dental program. She is majoring in chemistry and Spanish. She has completed enough credits to be considered a senior academically, even though she is still a junior with her athletic eligibility.

Kessel, who wants to be become an orthodontist, has played in 33 matches this season.

“It is no small feat to be able to maintain a 4.0 in any major, let alone chemistry, and much less at Hope with the amazing rigor they have in that department,” Schmidt said. “She has certainly set the bar high in term of what excellent in both what academics on the court means.”

Kessel was given the Elite 89 award during the 2013 Volleyball Championships hosted by Hope. Other previous winners at Hope are cross country runner Michelle Kerr (2013) and women's swimmer Chelsea Wiese (2012).