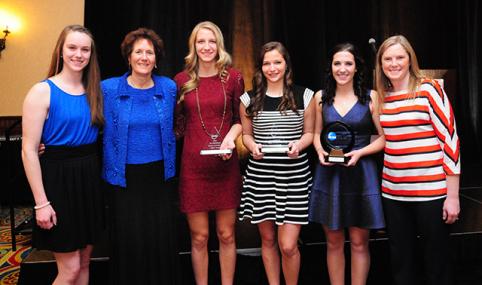 Grasmeyer is Hope’s first multiple All-American. She also claimed the AVCA honors in 2013 and 2012.

Hope coach Becky Schmidt said Grasmeyer has been an once-in-a-lifetime player to coach.

“I think about all the hard work she’s put into it the past four years in order to make that third All-America honor possible,” Schmidt said. “I’m very grateful that she chose Hope and thankful for the opportunity she gave me to try to have an influence on her the past four years.”

Hazekamp has recorded 10.81 assists and 2.66 digs per set this season. She ranks 11th in the nation in assists per set.

This is Hazekamp’s second All-America honor. She received second-team recognition in 2013 as well.

“Lauren is an awesome setter, just a tremendous leader off our court,” Schmidt said. “She just has a knack for the game of volleyball that is well beyond her years. For her to be leading our offense and just the way handles our court, we’re blessed to have her.”

VanderStoep received honorable-mention distinction for the second consecutive season. She is averaging 2.40 kills per set this season.

“The amount Amy has improved over four years has to be inspiring to every single one of the players in our gym,” Schmidt said. “How far she’s come and the type of player she’s grown into because of her hard work, focus and discipline is just inspiring.”

Grasmeyer, Hazekamp and VanderStoep helped the Flying Dutch claim a regional title and a share of the Michigan Intercollegiate Athletic Association championship for the second consecutive season.