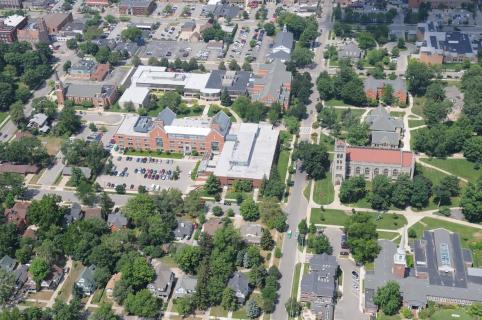 The award recognizes and supports the efforts of Hope faculty and staff who make extraordinary contributions to the lives of students.  Gillmore will be honored during a luncheon on Thursday, April 30.

“Jason is a faculty member that is the ‘real deal,’” said Dr. Richard Frost, vice president and dean of students at Hope, whose office coordinates the award, which is presented based on nominations from the campus community.  “He is a rock star in the classroom, an exceptional mentor with students doing research, and walks with each young person as they explore their faith and life.  His magic with students is his humility, faith and ability to listen.”

Gillmore joined the Hope faculty as an assistant professor in 2004 and was promoted to associate professor in 2010.  Hope named him a Schaap Research Fellow in chemistry, providing support for his research program, in 2013.  He was awarded the college’s Janet L. Andersen Award for Excellence in Teaching earlier this year.

Since coming to Hope, he has mentored 34 students in research during both the school year and summer.  His teaching is primarily in the organic chemistry lecture and lab sequence.  In the lecture he has brought the Peer Led Team Learning model to Hope, and in the lab he has been a champion of incorporating authentic research into the second semester independent synthesis projects.

In August of last year, he received a prestigious 2014 Henry Dreyfus Teacher-Scholar Award from the Camille and Henry Dreyfus Foundation, one of only seven presented nationwide to faculty in the chemical sciences at undergraduate institutions based on accomplishment in scholarly research with undergraduates as well as a compelling commitment to teaching.  The foundation had previously presented him with a Faculty Start-Up Award in 2004. The Research Corporation for Science Advancement named Gillmore a Cottrell College Science Awardee in 2006, and in 2015 retroactively named him a Cottrell Scholar as well.  In 2010, he received a Faculty Early Career Development Award from the National Science Foundation, which supported his research program for five years as well as his aforementioned educational initiatives and a series of biennial workshops to help other young chemical scientists from across the country as they prepare for their own careers as scholar-educators.

He has had several articles on his research published in peer-reviewed journals; all since arriving at Hope have included student co-authors.  He has also delivered invited talks around the country concerning his research.  Meanwhile Gillmore’s students routinely present their work at regional and national venues, with several having won awards for their presentations.

Prior to teaching at Hope, Gillmore held a postdoctoral traineeship at Vanderbilt University.  He completed his bachelor’s and master’s degrees at Virginia Tech in 1996 and 1998 respectively, and his doctorate at the University of Rochester in 2003.

The “Vanderbush-Weller Development Fund” was established in honor of longtime Hope professor and football coach Alvin Vanderbush, who retired in 1972 and died on Feb. 20, 2005. It was created by Ken and Shirely Weller of Pella, Iowa. Ken Weller is one of Vanderbush’s former players and also a former Hope faculty colleague.