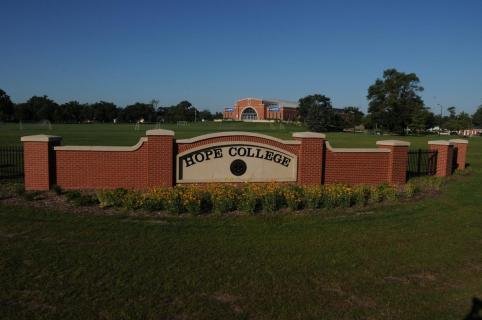 The team received the recognition for “”Foundations of Fitness: Initial Outcomes from a 10-Week Multidisciplinary, Pediatric Obesity Intervention.”  Morrison, an assistant professor of kinesiology who has taught at Hope since 2012, received the award as a junior member of the faculty who has mentored students in research.

The students participating in the project were graduating senior Jessica Krantz of Traverse City and junior Jorgie Watson of Grand Rapids.  Krantz and Watson are each majoring in exercise science and minoring in psychology.

The “Social Sciences Young Investigators Award” is designed to recognize and encourage junior faculty to partner with students in research collaborations that further the scholarship goals of the faculty member while developing the skills of critical inquiry and analysis in his or her students.  It includes funding for the faculty and student team to present the work at a professional conference.

The competition is open to junior social science faculty who worked with students on a significant research project, with at least one of the students returning for the next academic year.  The selection is made from among the eligible social science projects highlighted during the college’s annual Celebration of Undergraduate Research and Creative Performance, which was held on Friday, April 10, this year.

The two-year program consists of three 10-week sessions that provide families with age-appropriate structured exercise and lifestyle education, and is funded through an award from Herman Miller Cares.  The program, which meets at the college’s Dow Center, is designed for children age seven through 12.  The participating families are selected for participation based on recommendations from the children’s pediatric or family physicians, or school nurses.

A 2004 Hope graduate, Morrison assisted in the development and operation of a similar program at Helen DeVos Children’s Hospital from 2009 until joining the Hope faculty.  As a Hope student, Morrison concentrated on both exercise science and physical education within the college’s department of kinesiology.  His interest in children’s wellness began while he worked on a research project mentored by Northuis and Smith, who have been studying pre-adolescent growth trends in the greater Holland area since 1994 and had piloted an earlier program at Hope focused on childhood wellness.