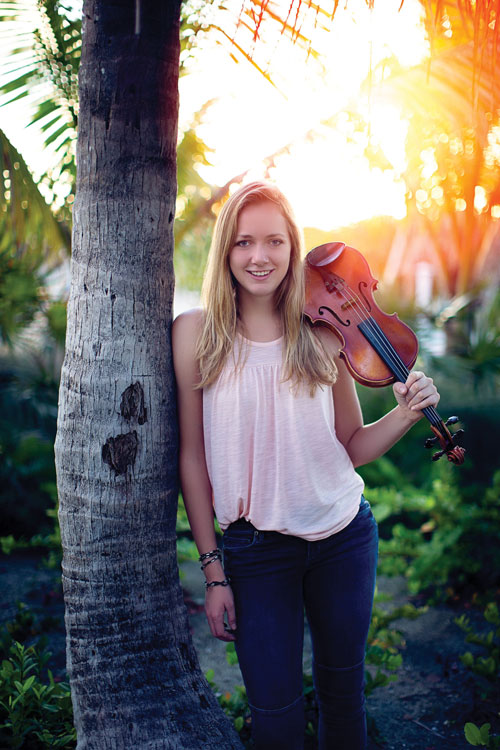 Violin Major to Tour the Globe with High-Energy Ensemble

A life-long dream of professionally performing music and touring has become reality for Eve Panning ’15, who has been selected to join the prestigious string group Barrage 8. A recent Hope College graduate, Panning double majored in Violin Performance and Instrumental Music Education.

Panning originally came to Hope to study in the pre-veterinary program. However, she quickly became involved in different ensembles like the Symphonette and Jazz Arts Collective, which exposed her to a variety of performance settings.

“I knew Hope had a fantastic violin professor and a great music department where I could explore different options and get the individual attention that wouldn't be possible in a conservatory,” Panning said.

Panning began playing the violin at age 6 and invested in classical violin lessons at Indiana University pre-college String Academy. With the guidance of mentors and teachers, she continued to study classical violin and fiddling, playing weddings and musical festivals. Panning cites these experiences — as well as playing music with her family — as the encouragement and opportunity she needed to experiment with different genres, learn to play by ear and improvise.

While cultivating her musical skills and knowledge through the music department at Hope, Panning found a mentor in Mihai Craioveanu, a professor of violin.

“Eve and I had many conversations about her future professional plans and aspirations. She conveyed to me her passion for performance and touring,” Craioveanu said.

In March 2015, Craioveanu received word of national auditions for Barrage 8, held in Boston, Chicago and Berkeley, California, and recognized a perfect fit for Panning. Realistically aware of the competitive process she was embarking on, Panning submitted her portfolio to the search committee. Weeks later she was invited for a live audition in Chicago. After her audition, she was invited to join Barrage 8.

“Following the outcome of the selection process, the national search committee told me how impressed they were with Eve’s overall application and audition. She was an ideal candidate,” Craioveanu said.

Both Panning and Craioveanu credit the college’s music department with the preparation it provided.

“At Hope, Panning was able and encouraged to explore various aspects of music. She benefited from many performing opportunities which at larger universities are normally reserved for graduate programs,” Craioveanu said.

Panning will be moving to Miami shortly and begin rehearsals with the rest of the Barrage 8 cast in September. While she knows the touring schedule will be rigorous, Panning is thrilled to travel to different countries while doing what she loves.

“It was a real pleasure working with Eve; she has a bright future ahead. Her recent accomplishment marks a very important step in her professional journey,” Craioveanu said.

Originally based out of Calgary, Canada, Barrage is a violin-based, modern world beat ensemble. With a blend of contemporary string arrangements and high-energy choreography, Barrage has toured in over 27 countries since 1996. They have since rebranded as Barrage 8 and moved headquarters to Florida, all the while keeping the same performance energy and musical diversity. A global tour will begin in January 2016.