Dear First Grade Journal - “Junie B. Jones: The Musical” is coming to HSRT! 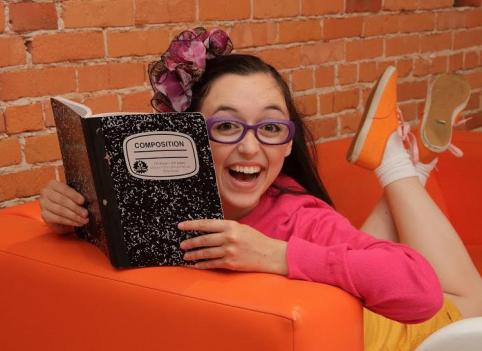 It's Junie B.'s first day of first grade and a lot of things have changed for her: Junie's friend Lucille doesn't want to be her best pal anymore. On the bus, Junie B. makes friends with Herb, the new kid at school. Also, Junie has trouble reading the blackboard and her teacher, Mr. Scary, thinks she may need glasses. Throw in a friendly cafeteria lady, a kickball tournament, and a "Top-Secret Personal Beeswax Journal,” and first grade has never been more exciting.

Director Daina Robins says that she was drawn to “Junie B. Jones” because she loves the nature of the title character. “She’s this wonderfully independent, free-thinking, exuberant, follow-your-instincts kid.” Junie B. is in a time “before adulthood hits and you censor yourself. Obviously there are things we need to learn how to control about ourselves, but I really enjoy her honesty and her assertiveness and her trying to live life to its fullest...I think she’s a great role model for young people.”

Mollie Murk, portraying the title role, agrees. “I remember checking out stacks and stacks of ‘Junie B. Jones’ books from the library when I was little, so getting to bring her story to life is incredibly exciting to me….She has so many lines that I, as a 21-year-old, still relate to....More and more book series pop up with spunky, kooky main characters similar to Junie B. Jones, but I think Junie B. started the trend!”

Robins once again returns to HSRT, having previously directed numerous shows for the company, including “A Light in the Piazza,” “Songs for a New World,” and last year’s CPT show “Alexander and the Terrible, Horrible, No Good, Very Bad Day.” Daina is Chair of the Theatre Department at Hope College, as well as a founding member of Double Edge Theatre in Massachusetts.

Music Director Fred Tessler returns to HSRT for his 22nd season. He has been involved with over 40 productions at HSRT. A resident of New York City, Tessler is on the faculty of Wagner College, where he has been Director and/or Music Director of over a dozen shows. He has also worked with many theatres around New York City and elsewhere.

Mollie Murk, in the role of Junie B., is an acting intern currently studying Theatre and Dance Performance/Choreography at Hope College. Last summer she worked as an intern at the Lookingglass Theatre in Chicago. Murk is also choreographing the production. Her choreography has been featured at Hope in “The Devil is in the Details,” “Urinetown,” and at the Knickerbocker Theatre during Hope’s student dance showcase.

Murk says that choreographing for a children’s production “has been refreshing! I know that I can bring silly, goofy ideas forward, and that the actors will laugh and be just as excited as I am. It requires a sense of playfulness that you don't always have the freedom for when working with more mature content.”

Murk has had to balance both learning the lead role and building the choreography in only three short weeks, on top of being in three other productions this season. “It all feels like a whirlwind in the best way,” she says. The challenge has helped her to be “more assertive and focused during rehearsals. In a way, it forces me to be on top of my game every day. It's a lot to juggle (sometimes literally, as there is juggling in ‘Junie’).” But Murk isn’t one to complain. “I am so thankful for the opportunity to dive into different types of work with such a fantastic ensemble of artists.”

Robins hopes that audience members walk out of the theatre knowing that “it’s okay to be you…and, like Junie B., to follow through on your great qualities, whether or not someone thinks they’re eccentric or weird.” She also hopes the audience comes out “feeling good about the fact that people can be themselves and can find their place among a group of people, whether it’s in school, or in their families, or anywhere, and not be alone in the process.”

The production team for “Junie B. Jones” includes Keenan Minogue as the scenic designer, Evan Hawkins as the lighting designer, Jacquelyn Loy as the costume designer, Chris Cvikota as the sound designer, Mandy Scott as the Stage Manager, Richard Perez as the Managing Director, and Rachael Hasse as the Production Manager.

If you want to stay connected this summer, make sure to sign up on our website for the HSRT E-Newsletter. Subscribers will receive behind-the-scenes videos, interviews, photos, articles and insights about this season’s productions.

Also, make sure to join us for our Bookfair at the Holland Barnes & Noble July 10 - 19! We will have live performances and readings with our “Smokey Joe’s Cafe,” “Junie B. Jones: The Musical,” “Jingle ARRGH The Way,” and “To Kill a Mockingbird” actors. Make any purchase (cafe included!) in-stores or online and say you're with the HSRT Bookfair and a small amount of proceeds will go to Hope Summer Repertory Theatre! Online Bookfair runs until July 24! Type in this code at the checkout in order to help the Bookfair raise money: 11651197