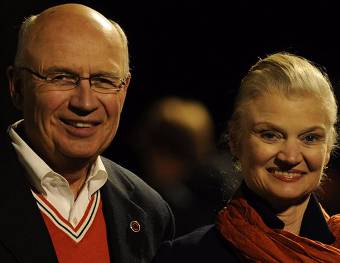 Hope to Break Ground for Student Center on August 31

The Jim and Martie Bultman Student Center at Hope College has been planned with students in mind, and the groundbreaking ceremony for the building on Monday, Aug. 31, has been scheduled the same way.

The event will take place during the last day of orientation for the newly arrived Class of 2019, immediately following—and just a few steps away from—the annual Student Activities Fair that helps incoming students learn about co-curricular life at the college.

The ceremony will be held at 4:30 p.m. along the former 12th Street between College and Columbia avenues.  The public is invited, and admission is free.

“The Jim and Martie Bultman Student Center has been envisioned and developed from the beginning as a space uniquely for students, and we’ve absolutely wanted students to help celebrate the start of construction,” said Richard Frost, vice president for student development and dean of students.  “Two years from now, the students in our newest class will be among those enjoying the center, which will be the campus equivalent of a family room just for them.”

Announced in the fall of 2011 as part of the college’s “A Greater Hope” comprehensive campaign, the Jim and Martie Bultman Student Center will be constructed in the central campus, adjacent to Hope’s Pine Grove.  The 42,000-square-foot facility, which will open in time for the start of the 2017-18 school year, will be the college’s first dedicated student-center space in more than 35 years.

The center will be built on the site occupied since 1956 by Nykerk Hall of Music, which will be razed in the coming weeks.  The start of construction for the student center waited until Nykerk Hall could be succeeded by the new Jack H. Miller Center for Musical Arts, which has also been an initiative of “A Greater Hope” and is opening this month.  Site work near Nykerk Hall has been on-going across the summer.

The building is being named for former Hope president Dr. James E. Bultman and his wife Martie Bultman.  James Bultman served as the college’s 11th president from 1999 to 2013, and he and Martie were robustly involved in campus life, prizing opportunities to connect with students, both during his presidency and during his earlier tenure at Hope as a faculty member, dean and coach from 1968 to 1985.  The Bultmans are both 1963 graduates of the college.

The Jim and Martie Bultman Student Center will be connected to the DeWitt Student and Cultural Center, which opened in 1971 as a student center but gave much of its space to college offices following the April 1980 burning of the Van Raalte Hall administrative building.  The new building will support a student-life program that has grown substantially since 1971 as enrollment has increased, from 2,101 students 44 years ago to more than 3,400 during the 2014-15 school year.

A large, multi-purpose room with links to an adjacent patio will provide space for a variety of program possibilities.  A family lounge with picture windows looking across the Pine Grove toward Dimnent Memorial Chapel and Graves Hall will provide space to socialize or bask by one of the building’s fireplaces.  A theatre will host the long-running student film series, speakers or Nykerk practices.  A small prayer chapel will provide a place to worship and reflect on God.  Multiple student organizations will have offices and shared space for working on projects.  The building will also have an exciting state-of-the-art food and coffee area.  On the second floor, the offices of Counseling and Psychological Services will be housed.

The “student way” will connect the registrar’s, residential life and dean of students offices in the adjacent DeWitt Center through a dynamic link to the Bultman Student Center, allowing a seamless transition between the two areas.

Total project cost for the student center is approximately $22.5 million, which includes the new construction, related renovation of the DeWitt Center and an operating endowment.  Major support includes a $10 million lead gift to the student center and the “A Greater Hope” campaign from the Cheri DeVos family of Ada.